Posted by Lauren in History on November 2, 2015

To finish off a brilliant Halloween weekend spent at the Scarefest at Alton Towers, and at #VEVOHalloween in Manchester, I decided to pop over to see the Diwali lights switch-on last night on Belgrave Road, Leicester.

The switch-on is a massive event because Leicester’s Diwali celebrations are the biggest outside of India, with up to 35,000 people attending each year. The ‘festival of light’ celebrates the start of the Hindu New Year. This year, it included a firework display at Cossington Street Recreation Ground and dancers on stage; there was also  the addition of a popular 100ft illuminated Ferris wheel helping to set off the fortnight of festivities.

Seeing as it’s the last year I’ll be living in Leicester, my housemate and I decided to brave a go on the scary ‘wheel of light’… 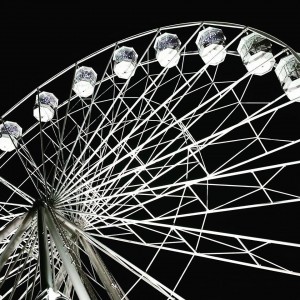 It was really fun, if not a bit wobbly and high up! Besides the wheel, we had a really good time enjoying the buzzing atmosphere, lights and the food at the festival. 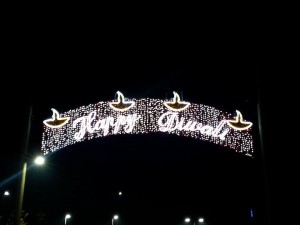 I personally think the effort Leicester puts into the event every year should be applauded. The festival is inclusive and fun for everyone including students, and it celebrates the cultural side of the city.

If you missed the switch-on yesterday then don’t worry. There are still more Diwali events coming up, including Diwali Day on November 11th where there will be another firework display on Belgrave Road and more celebrations! Also, the ‘wheel of light’ will be up until November 15th, which everyone should have a go on for only £5!

One response to “Diwali lights switch-on”