So February has been a very busy month for me, although I’m sure I say that nearly every month. This month was different though because it was my birthday! And #YOTTOO (you only turn twenty-one once, obviously).

My birthday meant that I had an excuse to tick off two things from my 2016 bucket list, as well as number 4 and number 7 of TripAdvisor’s ‘top things to do in Leicester’ list. These little outings were a trip to the Curve theatre, and a visit to the National Space Centre.

My visit to the Curve was very spontaneous, but I’m very glad we decided to go. A couple of fun-facts about it include that it was opened by Her Majesty the Queen in 2008, and unlike any other theatre in the UK, there’s no backstage area. 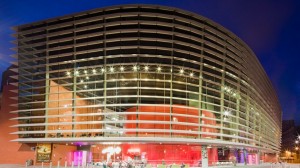 Above: The Curve Theatre [http://www.curveonline.co.uk/about-us/about-curve/]

The performance that we decided to see was Lord of the Flies, which some students may have studied during their English GCSEs. I unfortunately did not have this pleasure, although I had previously read the (1954) book by William Golding, so I had some prior basis of knowledge to compare the production to. The story basically follows a group of schoolboys who survive a catastrophic plane crash, and descend into a sinister struggle for survival.

I’m no theatre-critic or reviewer, but I can say that I thoroughly enjoyed it. The set was really creative and allowed different scenes to take place without a changeover, and the cast were brilliant. I especially thought that the casting of Piggy’s character was excellent.

So if this four out of five stars performance is anything to go by, I’d definitely recommend a trip to the Curve for reasonably-priced, quality entertainment in the cultural quarter of Leicester.

My second birthday adventure was my long-awaited trip to the National Space Centre, which I had heard great things about. 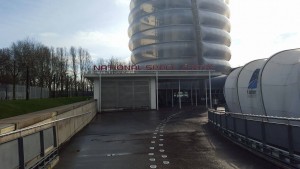 Above: The outside of the National Space Centre

Firstly, the Space Centre is a must-do for any student living in Leicester. I would recommend it not only to physics students, but any student with some sort of interest in space. According to the site, the centre is ‘crammed full of space suits, rockets, satellites, meteorites and everything you would expect of a world class attraction’… and ‘these galleries will make sure you have a full day of breathtaking discovery and interactive fun’. Well, I’d agree with that!

My personal highlights of the centre were the Sir Patrick Moore Planetarium, which is huge dome-shaped kind of theatre with seats that recline almost fully back. Because the animation is projected across the whole of the dome and the lights are turned right down, you really do become immersed in the story-telling of how ‘we are stardust’.

And secondly, I thoroughly enjoyed the simulator that we went on. We got to wear 3D goggles and feel like we were on an real-life rocket thanks to the convincing graphics and jolting seats – and I’m a huge fan of any sort of ride, or even simulated ride in this case! 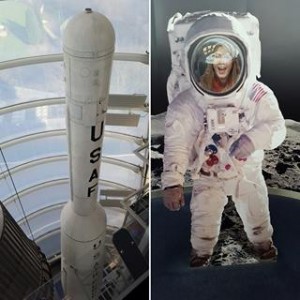 Above: a real rocket, and me pretending to be an astronaut

So sadly my birthday is now over and I will have to focus on my dissertation and final-year assignments for the foreseeable future. However, before I leave Leicester in June I’d still like to visit number 1 and number 2 on Tripadvisor’s list, Bradgate Park and Tropical Birdland.

Have you been to any of these places? What other places would you recommend visiting in Leicester? Let me know in the comments!