Posted by Jaipreet in History on September 15, 2016

I’m not sure if the title of this post is entirely accurate – I just wanted a tiny bit of alliteration. I was playing with the idea of ‘SIKK SOCIAL SKILLS’ but decided against it. Feel free to behave as suavely as you like though.

Right, new year. As you’ve probably already realised, friends are important, and it works the same way at uni. Everybody needs a break from or help with essays, and they’re your golden ticket. So here are some tips for collecting as many as your address book can handle.

Whether you loved or hated sixth form, the friends you made there are important. They’ve seen you through exam madness, the new discovery of clubs and jaegerbombs, and probably weird teen fashion experiments. As I say, they’re important, and it’s nice to know you have old friends there in amongst all the new ones. Try and make an effort to invite them to see you, to see them, or at least have a chat once in a while.

This might seem like the obvious one, but I need to throw it in here anyway. Even if you’re a returning student, it’s never too late to join something new. Putting yourself in a group of people that have something in common or share an activity is one of the best things you can do. I’d recommend joining with a housemate if you’re a little shy, but everyone’s in the same boat, so you’ll never walk into a room being the only beginner.

Another great way to meet people is to round up all the people you already know, even if you’ve only spoken to them for 5 minutes, and get them all to the party you’re about to throw. Tell everyone else to bring everyone else they know, and you’ve got a tonne of new people to bond with over whatever recreational activity you plan to enjoy for the evening. Also crisps and drinks never go amiss in terms of long term friendships. You can really win people over with free stuff.

Invite whoever you like along to see a cheap show, try out a new bar or five, go along to a society event, whatever you like. You’re living in a new place, and even if you’re staying in your home town, you’re living it in a new way. Make the most of it, and bringing people along on your adventures is a great thing to do all together.

Okay I’m expanding on the point from before, which on second thoughts did not get enough attention. I cannot stress how well people respond to free food. My cousin’s uni friends all met because one of them invited some people over from his course to his flat to make dinner. They ended up all forming the bridal party at her wedding. You could do something similar, or just put out some finger food and stick a movie on. Either way, this is a solid tactic to psychologically gain people’s trust. Hopefully it won’t be as sinister as it sounds.

So those are my five tips, may they guide you as you go forth and make all the social connections you could possibly need. Let me know in the comments whether you put any of them into practice, or if you have any suave social suggestions of your own – I’d love to hear them. Speak next week guys 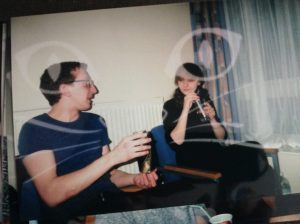 Hey. My name is Jaipreet, and I'm a History student in my third and final year at Leicester. I'll be blogging about the course, but also everything else to do with uni life, including preparing for graduation. Hopefully my blog will give you an idea of what it's like to study here - enjoy!