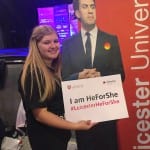 Most of you will have, in some capacity or another, heard about the United Nation’s HeForShe solidarity movement, which encourages men to engage with issues of gender equality and stand for women’s rights. Some of you may not know, however, that the University of Leicester is one of ten partner universities from across the world […]

So after dissertations were submitted we had two days until the History Ball. On Wednesday Big Band played at the Sports Awards, and as it was our last real performance (and my last performance with them ever) it got a little bit emotional. The Big Band were brilliant and everyone, sportsmen and musicians alike, enjoyed themselves. […] 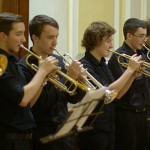 Yesterday was the joint Concert Band and Big Band concert. It started off with the Concert Band who played a selection of pieces from films, a suite by Holst and the Dam-busters. After a short interval it was Big Band’s turn. We played You’ve Got a Friend in Me from Toy Story 2, I’m in […] 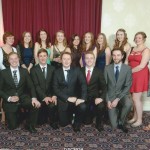 Last night was the Leicester University Music Association annual ball. My housemate and I both put down the laptops, tidied away the books and at 6pm sharp we were busy getting ready. We ordered taxis and by 6.45pm our house was full of musicians waiting for taxis. It took 3 taxis but eventually we arrived […]

On Saturday 15th February I went to De Montfort Hall to see the opening night of Dave’s Comedy Festival in Leicester. The host, a very funny man who looked and spoke eerily like James Cordon, was a gentleman called Tiernan Douieb. Tiernan made everybody laugh by picking out people from the audience and asking them […]

Wining and Dining with the Vice Chancellor

As some of you may know, I run the University’s Big Band. Though this is a lot of work – it really does keep me very busy – it comes with its benefits. Every February the Vice Chancellor invites Presidents from Performance Societies, amongst other people also involved in the union, to buffet supper with […]

Introductions and Music at Leicester

Hi there! I’m Claire and I’m the new Student Blogger for the School of Historical Studies, currently studying in my final year. In the next few months I’ll no doubt talk a lot about History and Music – two of my favourite things! So why not start early? Here’s my first blog about Music at […]