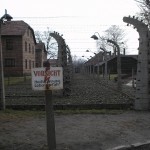 Sarah has already posted about Holocaust Memorial Day yesterday, but I thought I’d add something I saw on the BBC this week. A team of archaeologists has been using new geophysics tools to explore the grounds of Treblinka, the former Nazi death camp to the North-East of Warsaw, Poland. During the war and estimated 800,000 […]