US foundation buys Hopi masks for $530K, returns them to tribes

Posted by Charlotte in History of Art on January 25, 2014 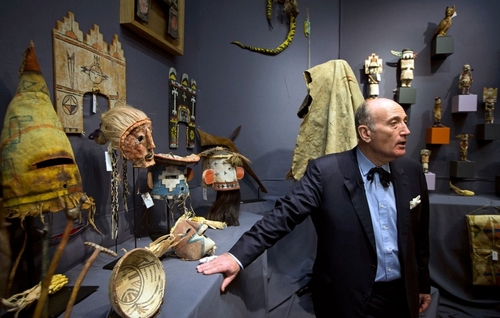 The Los Angeles-based Annenberg Foundation has revealed it purchased a set of 24 Hopi and Apache masks at a highly controversial auction in Paris last week. The foundation purchased the masks with the sole intent of returning them to the tribes in north-eastern Arizona, USA, who had been campaigning to get the sale blocked. The philanthropic organization paid $530,000 when the items went under the hammer on Monday.
The masks, some of which date back to the 18th century are considered to be sacred items by the Hopi and Apache peoples, and are not to be displayed in public.
“This is a great day for not only the Hopi people but for the international community as a whole,” said Sam Tenakhongva, a Hopi cultural leader, in a statement provided by the foundation. “Our hope is that this act sets an example for others that items of significant cultural and religious value can only be properly cared for by those vested with the proper knowledge and responsibility. They simply cannot be put up for sale.”

What do you think? Is it only right that tribal artefacts be returned to their rightful owners or do you believe that they serve a greater purpose as educational items in museums? Is the purchase of artefacts a positve step in repatriation of artistic objects or does it continue to play into the colonial ideals that took them from idiginous peoples in the first place?

The repatriaton of historical and artistic artifacts is a long argument within the art history community. It is my personal belief that all items should be returned to the care of their native countries for preservation and cultural insurance. Perhaps if the museums of western Europe were emptied of the millions of stolen artefects and artworks, the art historical discipline might be forced to look beyond the cosseted confines of its current eurocentrism and exotification of non-white cultures. Maybe a world where each country has proper claim to its artefacts and history would breed a new kind of art history, one not based on the pluder and theft commited by our predecesors.

Read more about the auction here