As I mentioned previously, I recently went on holiday to Italy. While I was there, I flew down to Sicily for a few days! I really love it there – it’s one of my favourite places in Italy. The food is amazing (I ate way too much) and the weather was fab (I actually have tan lines… whoa). And if you’re looking for natural beauty then it’s a must-visit in my book. Take the Scala dei Turchi for instance. It’s a rocky cliff on the coast of southern Sicily. But it’s not just any old cliff, it’s a seriously beautiful cliff that has become a tourist attraction because of its bright, white colour. Here’s a picture of me standing on it: 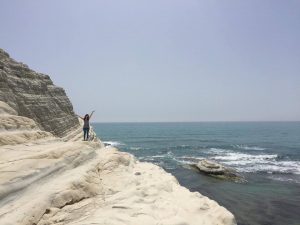 So yeah, that’s great and all, but I’m here to talk about some ART! While I was in Sicily I had the pleasure of seeing one of the most amazing pieces of installation art that I’ve ever seen. My boyfriend took me there as a surprise – he knows I’m a sucker for artsy things. It’s in the heart of the Sicilian countryside, completely away from civilisation. We drove around in the car for a while and got out at a house that was sitting alone on a hill practically in the middle of nowhere. We were greeted by Lorenzo Reina – a local sculptor who created  the installation. You can imagine I was pretty confused at this point as to where we were, but I just went along with it. We walked for about ten or fifteen minutes up a hill, passing sculptures (also by Reina) along the way. As we got nearer to the top of the hill, that’s when we saw the installation. Teatro Andromeda.

The picture seriously doesn’t do it justice. The whole thing was breath-taking. The Icarus sculpture lying motionlessly in the middle of a vast, empty stage, the carefully placed blocks of stone constituting the Andromeda constellation, the setting sun in the distance, the rolling Sicilian hills backdropping it all. Can you tell I enjoyed it? Normally when I’ve been in Italy looking at art I’ve been in the Galleria degli Uffizi, the Guggenheim, the Gallerie dell’Accademia. Those sorts of places that are filled with tourists. Looking at the classics… Michelangelo’s David, Botticelli’s The Birth of Venus, Leonardo’s Dukes of Ubrino. You know the type. Don’t get me wrong, I’ve loved seeing these artworks up close. But they just didn’t have the same impact that Teatro Andromeda had on me. Being so high up, with no one around except the two of us, the whole experience was almost ethereal.

I don’t think Teatro Andromeda is very well known outside of Italy, but I could be wrong. It’s because of artistic gems like these that I love art. Anyway, I could probably ramble on and on about how amazing I think this installation is, so I better stop before I get carried away! Thanks for reading!

Hey I'm Katie and I study Modern Languages with History of Art. I'll be blogging about my experiences as a final year student at the University of Leicester and letting you know how I'm coping after having just spent a year abroad in Italy! Alongside my studies I'll be spending my 4th year as Secretary for the Erasmus and Exchange Society, so you can expect an insight into both the academic and social side of Leicester. I love art, travelling and meeting new people.