My First Election, to End My First Year

As I’m writing this there’s less than twelve hours left until the polling station doors, up and down the country, open for the snap General Election; additionally it’s less than one week since I officially finished my first year at university, so I guess it you could say it’s an important time on a national and […]

I didn’t think this would actually be my first post, but in light of recent events, I thought it was time to spread some positivity. I’m sure most of you are aware of the terrible attack that occurred in Manchester; my thoughts go out to anyone who has been impacted. Yet among everything, what struck […] 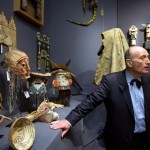 US foundation buys Hopi masks for $530K, returns them to tribes

Posted by Charlotte in History of Art on January 25, 2014

The Los Angeles-based Annenberg Foundation has revealed it purchased a set of 24 Hopi and Apache masks at a highly controversial auction in Paris last week. The foundation purchased the masks with the sole intent of returning them to the tribes in north-eastern Arizona, USA, who had been campaigning to get the sale blocked. The […]