Getting Ahead: Making Pre-Uni Connections

Casting my mind back to this time last year, I had finished my A Levels, officially left sixth form, and was sitting in a foreign country trying to distract myself about the then scary prospect of moving out to University. In hind site I wish I hadn’t have been so nervous, now realising it […]

Yesterday was the big day! I now have BA to my name and I’m officially a graduate of the University of Leicester.   All-in-all it was a really nice day. Mum and dad came down for the day to celebrate with me. First thing I did was collect my graduation robes from the Students’ Union. Being completely […]

A look back on the past four years

I guess this is going to be a bit of a retrospective blog post seeing as I’m feeling quite sentimental after just having finished my undergraduate degree. These past four years at Leicester have been some of the best of my life. It’s not going to be easy to sum them up in one post […]

The end of exams

So that’s it! A few days ago I sat my last ever exam of my undergraduate degree. Admittedly it wasn’t the best exam I’ve ever done, but I’m trying not to dwell on that. I’ve been writing essays/studying since the start of the Easter break so it’s really nice to be able to relax and enjoy the […]

The EU Referendum and Student Mobility

Before I say anything, I should probably point out that, with this blog post, I’m not trying to propagandise for Bremain. I’m aware that both sides of the EU referendum debate – voting to remain in and voting to leave the UK – have their pros that appeal to different groups of people. Maybe some […]

Stress Relief at the University of Leicester

I’ve just submitted three essays and had my first exam this morning. It’s crazy to think that there’s just a few more weeks left of exams and then graduation in July. It’s a busy period for us all at the moment, so my apologies if this blog post is a bit brief! It’s easy to get stressed […]

How to nail that interview

Yesterday I had an interview for a part-time position in the Students’ Union! I don’t think it went too badly. I’ll find out next week how well I’ve done. It was actually the first proper individual interview I’ve ever had, because in the past I’ve mostly done group interviews and stuff. So I was a […] 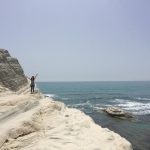 As I mentioned previously, I recently went on holiday to Italy. While I was there, I flew down to Sicily for a few days! I really love it there – it’s one of my favourite places in Italy. The food is amazing (I ate way too much) and the weather was fab (I actually have […]

So we’re already a couple weeks into the Easter break and I’ve just got back from a fab holiday in Italy. While I was away I wasn’t worrying too much about the essays I needed to write. Now that I’m back however, with very little planned for the next few weeks, it’s the only thing on […]

Looking For Jobs After Graduation

It’s that moment we’ve all been waiting for… Easter break! I’m so looking forward to having some time off from university. This semester, with it being one or two weeks shorter than usual, has been quite jam-packed as lots of professors have tried to cram as much stuff into their lessons as possible. But as Easter approaches, […]