This weekend many people gathered at the National Space Centre in Leicester to attend BritSciFi3. This is the third BritSciFi event to take place at the centre and, as I am a big science fiction fan, I knew I had to go. Since my first trip last year I have made a number of return visits to the Space Centre but this weekend was the busiest I have seen it. It is not difficult to see why though. There were also lots of interesting costumes and props to be seen from some great British science fiction shows such as Red Dwarf, Blake’s 7, Thunderbirds, Captain Scarlett and Doctor Who. A number of stars from Red Dwarf made an appearance on Saturday and on the Sunday, when I visited, I got to chat to a couple of the Doctor’s incarnations and his companions who were in attendance.

I also had the privilege of speaking to a number of the cast and crew of the fantastic, sci-fi /fantasy podcast series called the Minister of Chance. Everyone was absolutely lovely and together they create a wonderfully immersive story to listen to. It is free! Check it out!

The Space Centre was such a perfect setting for the event and it is perfect that I was so close. This weekend I was hugged by a cyberman, complimented by a dalek and I walked on ‘Mars’ with the Doctor… I can’t wait until BritSciFi4! 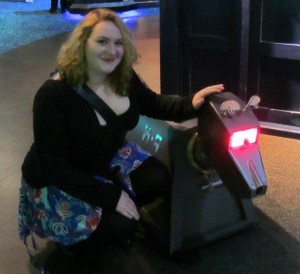 Zoe graduated from the University in Summer 2013. Hi! I'm Zoe and I am currently in my fourth year of the MSci Interdisciplinary Science programme. My equal love for all the sciences meant that IScience was the perfect choice for me! When I am not studying I often like to fill my time doing something creative, playing video games or doing something science-fiction or fantasy related. In my blog I hope to give an insight into my life as a student here at UoL.