Posted by David in Natural Sciences on November 1, 2013

Today marks the end of the first core module for the third year (aside from a problem set due in Monday), with next week being dedicated to tackling the problem statements that form its foundations. In the case of Evolution, this consists of a report explaining the processes that give rise to maize being the domesticated form of teosinte despite radically different morphology, a report on the late Devonian mass extinction, a lab report comparing the skull morphology of key species in the Homo genus, and a podcast detailing current evidence about Australopithecus afarensis.

Core modules run consecutively lasting five weeks at a time, and tackling the topic of evolution from an interdisciplinary perspective has meant studying not only evolutionary biology, but delving into palaeontology in how the fossil record is used to elucidate past environments, phylogeny trees, and key events in the Earth’s history, applying different mathematical models to show how simple changes in fitness, genetic drift and gene flow can drastically alter the fixation of different alleles, and then combining these different aspects to give the overall picture of the study of evolution.

While the final week on human evolution was always going to be a highlight, it was also fascinating learning about Hox genes. These play a significant role in anterior-posterior axis patterning (what type of cell goes where in a body plan), and have been shown to be conserved in species spanning a number of animal phyla. Interestingly, if expression genes are knocked out in this case, others will express to fill the space, leading to striking differences in morphology, such as fly antenna being replaced by limbs! 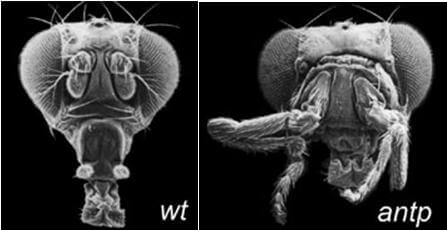 A comparison of a wild type individual and an individual with the antennapedia protein expressed in the head and thorax – a striking example of how homeotic genes can be mis-expressed when certain expression genes are knocked out.

A banner dropped outside the students’ union.

This week University staff also took part in a nationwide strike over pay disputes, with many receiving an effective pay cut of up to 13%  over the last few years as a result of pay freezes. As a student, seeing how dedicated the staff are on my degree despite clearly being overworked in going beyond their contract hours left me in full support, and it was a great experience joining them on the picket lines, handing out leaflets and talking to other students, discussing why student support is important.

So next week looks to be largely camped out in the library, with some short training sessions in between for the computer programmes I’ll be using as part of my third year project, and then it’s on to molecular cell biology and nanoscience! A celebratory I-science bar crawl is also in the works to mark the end of the first module, along with an upcoming Christmas meal and a design competition for this year’s society t-shirts.