Posted by David in Natural Sciences on January 24, 2014

The year has been divided into groups, all now furiously pulling apart the material we’ve been learning on cell signalling pathways in the context of their chosen topic. 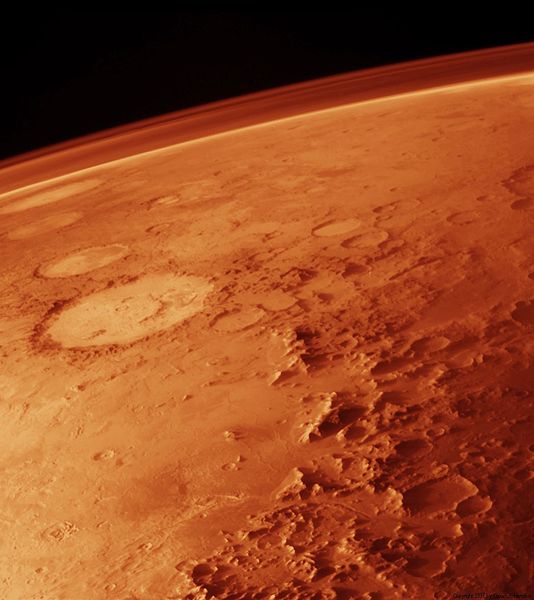 Any hope of humans reaching here and beyond requires much more research into how the body responds to low gravity environments (CREDIT: Wiki).

For my group, we’re tackling disuse osteoporosis, in particular with regards to the physiological effects of long-term space flight. Here disequilibrium in bone formation and absorption is observed, linked to a disruption in the Wnt signalling pathways. Simply put, osteoblasts secrete an unmineralised bone matrix of collagen and calcium binding proteins, forming the foundation for new bone tissue upon which calcification occurs. On the regulation side of things, osteoclasts are involved in bone reabsorption, breaking down bone and releasing minerals back into the blood stream. Astronauts face degradation levels within months to that of years on Earth (even with extensive fitness programs), and with no stabilisation level yet observed this poses one of the greatest obstacles in remaining in microgravity for long periods of time.

While cell engineering is still in its infancy with regards to fully realising complex synthetic pathways in vivo, the potential of the field is staggering, and feeds off of many areas of science. From evolutionary models elucidating the highly specific yet heavily interlinked network of signalling pathways, in turn underpinned by localised areas attempting to lower the free energy of the system, to the chemical interactions that bring about conformational changes leading to systems resembling computational circuits, and further into self organisation where biology begins to instruct engineering, it’s hard to understate the excitement of this topic!

Aside from that, although only weeks into the second term, my personal tutor has already inquired into the kind of projects we were thinking about doing in the fourth year, which appeared to give a unanimous reaction amongst those staying on that the year is passing much faster than first realised.

Like MPhys, MChem and other integrated masters courses, Msci consists primarily of an extensive research project that is undertaken throughout the entire final year of the degree. This feels like a daunting prospect, not least because academically you’re narrowing your focus in where you might head in the future. Personally, I’ve really enjoyed my third year project in attempting to model quantum interactions in extreme environments, and would love to take it further, though with so many different areas to choose from it’s no easy decision!