Metamaterials, speakers from industry, and Winnie the Pooh’s suspected B12 deficiency

Posted by David in Natural Sciences on February 19, 2014 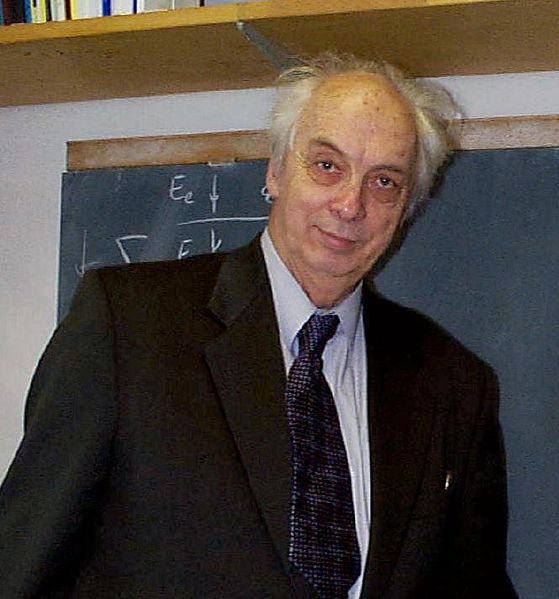 Victor Veselago was the first to consider materials with negative permittivity and permeability values, predicting that such materials would result in very strange properties. (Image Credit: Wiki).

Last week marked the end of the electromagnetism and cell communication module, with the accompanying exam only weeks away.  As well as a proposal for the design of a new cell-signalling pathway, the second deliverable was concerned with the viability of making someone invisible (or more specifically, if electromagnetic waves can be bent through a large enough angle to achieve this). Such a feat involved going further into electrostatics, transmission lines, optics and electromagnetism, as well as looking into materials that cause the negative refraction of light, known as metamaterials. Victor Vasselago first discussed these theoretically in 1967, where he predicted that at the interface between a conventional material and a negative refractive index material incident light would refract in the reverse direction, indicating the possibility of rendering an object invisible. Through the use of split-ring resonators or inductor-capacitor transmission lines to simulate resonators, cloaking has now been shown experimentally over a limited range of frequencies, so the feasibility of invisibility cloaks is not far off!

Aside from finishing core module work, the Interdisciplinary Science Society is now busy planning the next big meal, a games night, and a large symposium event. The plan for the latter is to have a series of talks in one afternoon from industry speakers in areas such as the NHS, sustainability, scientific publishing, scientific journalism and more, as well as a number of alumni to speak about their experiences after graduating from the degree. As the degree has only been around for about ten years, we felt the inclusion of alumni was particularly important, and from the responses we’ve gotten so far it looks promising! This should be taking place sometime in May, and with both the Career Development Service and department working with the society, and the department even agreeing to help fund the event, it looks like it could be a great success, providing we keep on top of everything!

With the work of the second core module handed in, the next six weeks mark dedicated project time for third year students. While the suddenly sparse timetable feels initially like a nice break from the constant hand ins, I’m told this is short lived when you begin to realise how quickly six weeks can pass…For some this means 9-5 in a lab, while others might be out doing fieldwork, analysing heaps of data or running computational models (like me!).  Along side this, the Journal of Interdisciplinary Science Topics workshops and editorial board meetings continue on, now into the third week. This involves both writing and reviewing short papers to gain experience of how the whole process works in academia, and you’re encouraged to be creative with what you write about. My first paper, for example, investigated the possibility of actually being able to ‘come in like a wrecking ball’, and myself and a friend just finished a paper on assessing the behaviour of Winnie the Pooh with the conclusion that he may have a B12 deficiency…As this has been running in the physics department for a number of years, it can be quite a challenge to think of things that haven’t been done already! They certainly make for entertaining reading, so I thoroughly recommend checking some of them out.

Finally, the end of last week was also significant in that it was the last day for one of the teaching fellows on the natural sciences degree. As the department is quite small, you get to know staff very well, and it was really sad to see her go. Cat, you’ll be greatly missed!