With the end of term now just weeks away, my days are currently filled with climate proxies, programming, and thinking of every question that could possibly come up for my project viva now just days away…

Unlike a lot of courses, natural sciences has core modules running in all three terms, which, for my year, means Palaeoclimate and Climate Modelling. This module focuses on trends in the geological record from hundreds of years up to millions, with a particular focus on the trends correlating with the industrial revolution up to the present day and beyond. Understanding and responding to anthropogenic climate change is often hailed as a key example of how an interdisciplinary approach is required to really address the problem, encompassing many aspects of the physical and social sciences. From an undergraduate’s perspective, it does feel in many ways like a ‘greatest hits’ of a lot of the modules in the last few years, and quite a fitting end to the third year.  It’s also fascinating (and alarming) to study a field now changing so rapidly as models are refined and new data comes in. Many of the journal articles on the reading list are just years old, and the unprecedented recent changes in comparison to the climate cycles observed in the past are really quite staggering. This time round the deliverable consists of a plan for a series of 10-minute videos aimed at undergraduate students on different aspects of the module, one of which will be filmed and submitted along with a support pack of educational materials. Storyboards are already in the works, so I’ll let you know how that develops!

Running parallel to this are the last few lab sessions and the final project of the programming module: writing a programme in Python to simulate many body interactions. So far I’ve managed to get a given set of particles to interact, but removing and adding them in real time and factoring in collisions is a whole different matter… 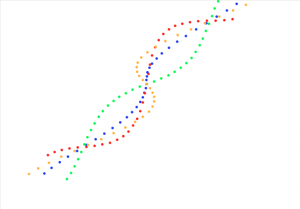 Here’s a visualisation of the trajectories of several particles of varying mass in the current state of my programme. In this case all start with the same velocity vector so there’s a general trend in one direction.

I mentioned in my last blog post about the Inaugural Employability Symposium, which I’ll discuss as soon as I get all the photos in and what not. Needless to say by most accounts it was a success!

As the final weeks approach it’s all starting to feel quite sentimental. The final lab scripts are to be handed in next week, and then just two weeks till the final exams of the year! Summer plans are discussed for some, plans after graduation for others. On such a small degree there’s a real sense of comradery, and with only half the year continuing onto the integrated masters, it’s certainly not going to be the same.