Posted by David in Natural Sciences on October 12, 2014

Transitioning back to university life after time away never feels like an easy process, but now that every module is underway and projects have been mapped out towards July, graduating is starting to feel like a tangible goal. 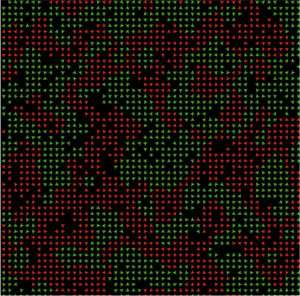 With only a minor preference for similar neighbours, widespread segregation can be the result.

Last week the complex systems module began by looking at the emergent properties of large systems. A pioneering example of this was by Thomas Schelling, who looked at (among many other things) segregation in cities. What he showed was that segregation between different communities can occur even from a very minor preference, and so an outcome of what might look like a strong prejudice could arise from a preference of having say, one neighbour in three that is has the same income, religion or skin colour. What’s interesting about this is that the large-scale division isn’t predictable from individual-level properties, and that only by simulating these interactions on a large scale does this novel behaviour become clear. Another place you can see this is in traffic jams, which can form spontaneously without a central cause, simply from the individual behaviour of drivers.

Last week was also the first in a series of seminars hosted by the Interdisciplinary Science Centre. Professor Paul Monks gave a talk on his career as an atmospheric chemist, moving from studying processes in Titan’s nitrogen-rich atmosphere, to recording trends in air pollution and advising policy makers in response, to designing and testing novel techniques to ‘fingerprint’ the air. The last of these is pretty exciting (and interdisciplinary!), where variants of mass spectrometry are now being developed for real-time analysis of gaseous samples. The potential applications for this are incredibly far reaching, from detecting diseases from a person’s breath, to detecting a dead body underground, to quantifying the moment when fruit beings to over ripen. It was a thoroughly engaging talk, and it was interesting to see just how diverse a chemist’s career can be.