The final two weeks of term flew by in a blur of tying up loose ends on various bits of different modules and a host of Christmas-themed events. Despite the many broken components, finger burns and sanity lost over seemingly spontaneous problems, my year managed to complete the Arduino computing project in time, with everything just about working! We had to modify an electric slot car set to record and output acceleration in a number of formats, use that to adjust speed automatically so the cars can find the maximum speed for each portion of the track without falling off, and get the cars to stop at different ‘stations’ of the track, recording how long each lap took. Automating the whole process turned out to be more challenging than originally thought, as it took a long time to design a sensor system that would register the car arriving at a certain place at high speed, but it all worked out in the end. We even jazzed it up a bit with LED traffic lights and a piezo buzzer to make an exploding noise if the car fell off the track! 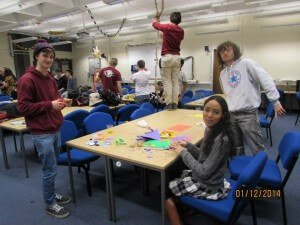 Alongside this, the Interdisciplinary Science Society organised the annual decorating of the degree’s main teaching room, including pizza and a Christmas quiz (which I’m happy to say my team won!). They weren’t alone in doing this either: most of the pubs not far from the university had their own Christmas quizzes, with mulled wine, mince pies and various other festivities, all of which contributed to a great end to the term. Now I’ve got just a few more things I wanted to finish in the lab before heading down south, and hopefully getting enough time to write everything up!