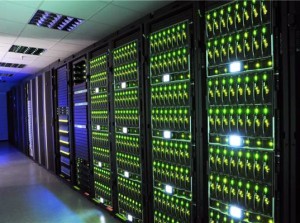 ALICE – Leicester’s supercomputer, is a pretty great way of computing costly numerical methods within a reasonable amount of time!

The second term is now well underway and it already feels considerably different to before Christmas. With microcontrollers soldered beyond recognition and the report handed in, the fourth year programming module now focuses on numerical methods, which are used to approximate solutions to functions that can’t be solved exactly. One of the best-known examples of this is probably the Schrödinger equation for molecules with more than one electron. This equation can in principle describe all properties you could want to know about a system, but the nature of the equation means it’s impossible to solve analytically for anything but the smallest systems. That’s why many universities (including Leicester) have a supercomputer, which allows them to, among other things, approximate solutions to the Schrödinger equation numerically. This has formed a large portion of my third and fourth year projects, and it’s been pretty exciting to play around with! 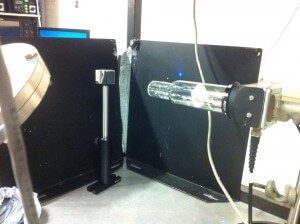 New targets means new laser dyes, which means moving from green lasers to blue. The tube on the right is a neon cathode lamp, the fluorescence of which is used a reference for other measurements.

Speaking of my project, on the experimental side of things we’re now successfully producing argon plasma, which glows a lovely bluish purple in the visible (I’ll try and get a picture!). We need this to help break apart known molecules, in the hope of making some previously unknown ones. Before going for the novel molecules we’ve got to make sure we can get the timings right, so at the moment I’m trying to find a signal of something where we know where to look, to test if the precursor is indeed being pulled part.

The other big change is everyone’s now talking about applying for graduate work. In fact, this was partly sparked by someone in my year getting a job in the civil service! Being on a natural sciences degree means graduate prospects are surprisingly broad. Alumni have gone on to do PhDs in fields as varied as neuroscience, marine biology and computational physics; NHS graduate schemes for working in the health sector; science communication in working for the Nature journal or the National Space Centre; environmental consultancy; research scientists in government sectors, and that’s just from the last two years! The plans for my year are equally varied, with most looking to go into research in academia or industry. I’ve been pursuing my hopes for doing a PhD in physical/theoretical chemistry, which I’ll talk more about as soon as the dust starts to clear.