There’s now just three weeks left of term and everyone’s pushing to get the results they need to write up their project reports. Those in third year are in dedicated project time, and both years are now split into groups of similar topics to present their work each week in project seminars. These are great for keeping you on target and marking your progress, though they often come around again far too quickly reminding you just how little time you have left! My project has had mixed success, where some aspects are essentially finished and others have hit quite a few obstacles. From light/air leaks, to samples degrading or evaporating, to equipment breaking, the amount of things that can go wrong can serve to make the last few weeks a stressful time! 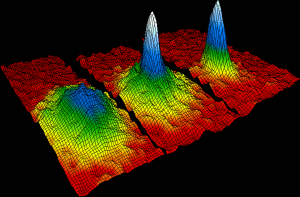 This shows the velocity distribution of bosons (particles that can form a condensates) at different temperatures. As the temperature is lowered, more particles occupy the same state.

Another module on every fourth year’s mind is the advanced study topic. As well as a literature review on your given subject due after Easter, at the end of the second term students give a 40 minute lecture pitched at a third year undergraduate audience. At the start of the year I chose to study Bose-Einstein condensates and superfluids, with a focus on how superfluid helium differs from a condensate in the lecture. This is a really fascinating research area where particles with integer spin (like atoms with equal numbers of protons and neutrons) begin to fall to the same quantum state below a critical temperature, essentially giving quantum behaviour on a macroscopic scale, resulting in strange properties like quantum tunnelling and the ability of two condensates to interfere with each other like two macroscopic waves.