Central to the final year of the integrated masters is the fourth-year project, taking up half of all allocated module time and culminating in a project report (which I gave some advice on writing here). After months of working in the laser lab, running hundreds of simulations, and 24,600 words I’m pleased to say last Monday it was all finally done! 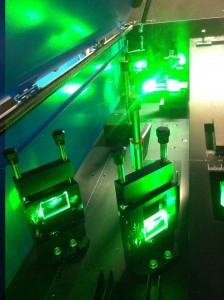 Inside the dye laser used for the duration of my project.

In the end my project consisted of four components, two of which involved simulating molecules using electronic structure theory to aid in detecting them in the future, while the other two consisted of optimising and using a laser-induced fluorescence rig as a method of trying to find new molecules. In both cases the molecules we were interested in are thought to be detectable out beyond the atmosphere in the interstellar medium, where an understanding of the chemistry is fundamental to understanding the processes of star and planetary formation, and the chemical composition that’s observed in different star systems. It was great having a diverse project where I could explore the systems from both a theoretical and experimental point of view, and having a large part of the experimental side consisting of fixing and optimising the equipment was a really interesting way to get an idea of how everything works. All that remains now is to defend the project in a 30-minute viva, scheduled in just under two weeks! After some tentative celebration, all focus is now given to the remaining science of complex systems and scientific computing modules, so expect to hear about little else but numerical simulations and the emergent properties of seemingly simple systems over the next few weeks…