Hello, my name is Osarenkhoe and I’ll be taking over the Natural Science Blog for the duration of the academic year. I’m currently in the fourth and final year of the course. A large portion of this year has and will continue to be spent working on my research project, studying nanoparticles produced using a novel and globally unique synthetic method, created here at the University of Leicester. As a result, i’ve gained a huge appreciation and respect for the nitty-gritty aspects of research and the myriad of factors that need to be accounted for before carrying out scientific experiments. This is exactly why I’m so impressed with the recent discovery made by Laser Interferometer Gravitational-Wave Observatory (LIGO) scientists this week. The National Science Foundation (NSF) announced that LIGO scientists have been able to directly detect gravitational waves for the first time. 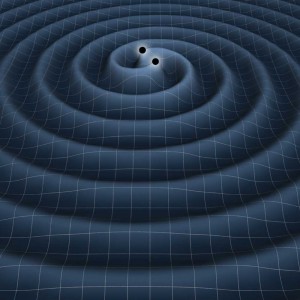 Ok, lets breakdown the main points to take away from this discovery. About 100 years ago Albert Einstein proposed a new theory of gravity, the general theory of relativity. In a nutshell, he believed gravity to be a series of warps and curves in the fabric of space-time. In addition, Einstein also proposed that due to this hypothesised flexibility in space-time; ripples in space could be produced by something jostling the fabric of space-time. The phenomena causing this jostling would most likely be a highly energetic astrophysical process, such as black holes, and the ripples produced are what we refer to as gravitational waves. The fact that LIGO scientists have detected these waves not only proves Einstein’s theory but it also allows us to explore the universe in new ways; previously it was waves of light, now we could be entering the era were waves of gravity are used to investigate the universe.

Hopefully this will make for some interesting dinner time conversation for anyone going out this Valentine’s Day.

Hey, I’m Osarenkhoe, a fourth year Natural Science student. I have a huge interest in interdisciplinary research and the breakthroughs that occur when you cross the boundaries between the sciences. In my free time I enjoy playing chess, mixed martial arts as well as video games and anime. I’ll be blogging about my course, making the most of your Uni experience and interesting things you can do in Leicester.