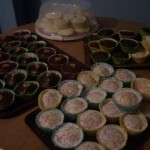 Posted by Zoe in Natural Sciences on February 19, 2013

This Sunday a large portion of  my day was spent making a rather large number of cupcakes. The reason for this was that today was the day of our IScience society, charity cake sale. The event was held to raise money that will go towards purchasing much needed equipment for schools in Kenya. In particular, […]

Posted by Zoe in Natural Sciences on December 11, 2012

This weekend was the first visit day of the academic year. For those of you that are unsure, a visit day is similar to an open day  in that the University opens its doors to prospective students who come to get an idea of what it would be like to study here. However, visit days […]

So far my summer has been fairly quiet and so it was a bit of a shock for me last week as I spent most of the hours of my days helping out with the IScience summer school. I decided a while back that I was going to volunteer as I had helped out last […]