Module development in the heat

For the last two weeks myself and another natural sciences student (although I guess I’m about to be a graduate!) have been caught between the airflow of two overworked fans as we struggle to keep the physics lab at a bearable temperature. Over the course of July we’ve been tasked with designing modules for […] 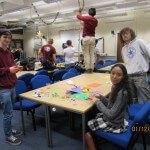