How did it come round so quickly? This is the question I have been thinking for the past few days. At 5pm this Friday all of my University submission will be finished. This last term has been hectic to say the least and I have been so busy working hard on my various modules that […] 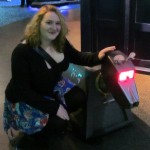 This weekend many people gathered at the National Space Centre in Leicester to attend BritSciFi3. This is the third BritSciFi event to take place at the centre and, as I am a big science fiction fan, I knew I had to go. Since my first trip last year I have made a number of return […]

Posted by Zoe in Natural Sciences on January 6, 2013

The Christmas holidays are now over and I will be heading back to Leicester and starting Uni again shortly. It has been a busy holiday and the new term has come round very quickly as it does every year! Sadly, this Christmas I have had to say goodbye to a wonderful grandad and so things […]

Christmas time and the end of term

Posted by Zoe in Natural Sciences on December 18, 2012

As always, this first term has absolutely flown by and it has now come to the start if the Christmas holidays. As a fourth year I am here a little bit longer than a lot of students; it is a little lonely actually! Everyone leaves so abruptly and campus changes from really busy to just a little too quiet… […]

Posted by Zoe in Natural Sciences on December 11, 2012

This weekend was the first visit day of the academic year. For those of you that are unsure, a visit day is similar to an open day  in that the University opens its doors to prospective students who come to get an idea of what it would be like to study here. However, visit days […]

It has pretty much been impossible over the last couple of weeks to be in Britain and not be swept up with Olympic fever. Not that I am complaining that is; in fact, I am quite sad for it to be over. Initially I was interested about the Olympics being here but not so much […]

Recently the University has purchased new sports facilities on campus including a new gym, sports hall and swimming pool. I have always enjoyed swimming and so was sad to know that the University didn’t have their own pool. It wasn’t to much of a problem, there has been always been a public pool that was […]