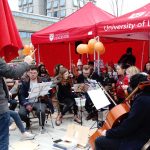 Posted by Tabitha in Natural Sciences on February 27, 2018

UoL Orchestra performs in the snow.   Every February, universities across the UK participate in ‘Raising and Giving’ (RAG) Week, and here at Leicester we’ve been giving it all we’ve got. This year it also coincides with ‘Wellbeing Week’, making the campus a pretty positive place to be.   Despite not being very musical myself […]

Posted by David in Natural Sciences on November 16, 2013

After a week spent in the library with a 21 hour session on the final day and falling ill in between, all of the deliverables were finally handed in, ending in a tired late afternoon society drink when everyone finally woke up. And so begins molecular cell biology and nanoscience. This module is based around […] 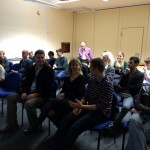 It’s been another busy week for the Interdisciplinary Science Society. On Wednesday we hosted a seminar entitled “Tetrapod Evolution in the Early Carboniferous – the TW:eed Project” by Dr Carys Bennett, where she discussed how many scientists from a range of disciplines (and universities!) are just beginning to uncover one of the most important fossil […]