One thing I love about the incredibly long summer holiday is the fact that I am lucky enough to be able to travel the world and see new places.

This summer I was able to re-visit a place that I simply adore… Dubai!

For those of you who don’t know, Dubai is one of the most popular cities in all of the Middle East. As one of the seven emirates, of the United Arab Emirates, this growing cosmopolitan metropolis is infamous for its extravagant and indulgent tourism industry.

Below are 5 places I love to visit every time I go to Dubai and recommend for any of you that decide to go in the future!

Dubai is renown for being home to some of the most famous souks all over the world. For those who don’t know, a souk is like a bazaar or market where you can buy a range of products ranging from spices and perfumes to gold and textiles.

The Burj Al Arab, a 7* hotel, is the symbol of the Emirate and encapsulates the indulgence, wealth and hospitality of the Middle East. I was fortunate enough to have Afternoon Tea at the hotel and it was definitely an experience you will never forget.

The Atrium in the Burj Al Arab 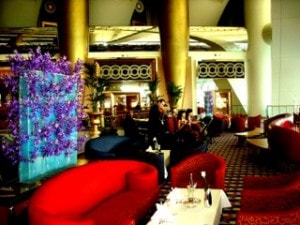 The Dubai Mall is the biggest shopping mall in the entire world and it is every shopoholic’s dream! Nevertheless, putting the glorious houses of fashion aside, the Mall also houses an aquarium, ice rink, cinema and the tallest building in the entire world called the Burj Khalifa. My favourite place to be in the Mall, however, is sitting outside Carluccio’s watching the amazing Dubai  Fountains in the evening.

The magnificent Burj Khalifa, the tallest building in the world outside the Dubai Mall, the biggest shopping mall in the world

The Dubai Marina is a really calm area, in comparison to the hustle and bustle of Downtown Dubai. They have an amazing waterfront promenade outside yet another shopping mall and a fancy boutique strip called ‘The Walk’! Nonetheless, the best thing to do when you are at the Marina is to go on a speedboat tour. Most of the companies around the Marina will take you to get spectacular shots of the entire Marina, the Palm Jumeirah (which is a man made island in the shape of a Palm!) and the Burj Al Arab.

The towering buildings by the Dubai Marina

The Burj Al Arab from the Persian Gulf

5. Aquaventure at the Atlantis Hotel

The Atlantis Hotel is situated at the top of the artificial, man made Palm Jumeirah island. It really is a magnificent hotel, and is often seen as the other icon or symbol of Dubai. The best thing about the Hotel, in my opinion, is that it is home to its own water park called Aquaventure and Lost Chambers Aquarium.

Outside the magnificent Atlantis Hotel

I really miss Dubai now that I am back in England, but I can’t wait to go again one day.

Finally, I hope you all are enjoying the summer. I want to give a massive belated congratulations to everyone that will be attending the University of Leicester in the Autumn!!

I look forward to seeing you all!

Zara has now graduated from the University of Leicester. Hi! I’m Zara and I’m a commuting final year Law student. I am here to tell you all I can about what its like to study Law here at the University of Leicester. Also, I hope to show you that you can still manage, balance and enjoy University life, even if you are staying at home. I have an absolute passion for human rights, international law and all things Beyoncé! When I’m not listening to her (or studying of course), I enjoy getting involved in fundraising for various charities and making plans to travel the world. What about you?