As a result of the immense joy and relaxation my flatmate and I derived last year from being a part of Lush Student Radio, we decided that we really had no choice but to keep it up this year. Our show is entitled ‘Ellie and Gina’s Whimsical Chat’ and is centred around discussing, film, TV, books, YouTube and anything else that we think might make for an interesting yet light-hearted discussion, hence our tactical use of the word ‘Whimsical’ in the title of our show.

Sadly Ellie was unable to join me for our first show this week and so I called for reinforcements in the form of my brother, Dominic. Now, as I mentioned to listeners on Monday Ellie does not simply provide me with emotional support but is also the shows technical support and so this was the first week that I was in charge of the equipment that makes our show audible to the outside world.

I had watched and observed Ellie figure out how to use the system for a year, but for one thing seeing something being done and doing it are a little different and for another some changes had been made to the software and so from the moment that I sat down I knew that I was in for a bit of a challenge. Nevertheless, after a few false starts in which I introduced a song that didn’t immediately play, I managed to figure out the basics and the show was underway!

This week we talked about the casting of the new James Bond film, Spectre, the phenomena that is the proliferation of books written by YouTube stars and the best and worst Halloween costume ideas.

All in all the show was a success and I learnt some news skills. Ellie and I have decided to take it in turns operating the equipment during our shows from now on and so I’m really excited to expand my knowledge of the software and make some improvements to the show.

You can learn more about Lush Radio and have a listen through their wesbite. Let me know what you think and what you’ve been listening too.

I hope you are all having a lovely weekend! 🙂

P.S. Ellie and Gina’s Whimsical Chat is broadcast each week on Monday’s at 1pm just in case you fancied checking it out. 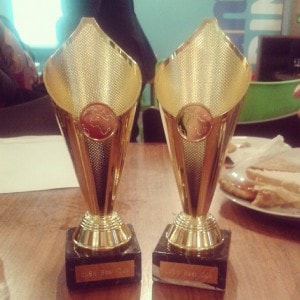 Ellie and I won the Best Duo award for our show at the Media Awards last year.