Ellie and Gina’s Whimsical Chat, the radio show my friend and I co-host, has been nominated for ‘Most Effort’ in the Media Awards. This came as a very pleasant surprise to Ellie and I on yet another day of revision boot camp.

Last year the Media Awards took place in the Union Diner on campus. We were all dressed to the nines and had a lovely time mingling with the members of the other media groups. We were incredibly chuffed to be awarded ‘Best Duo’ for our show and it would be pretty fantastic to win an award for the second year running.

Last year if we wanted to be considered for an award we had to submit an audio sample from our show, a comment from a listener and answer some questions. The winners were chosen by judges prior to the Awards evening.

This year the winners will be decided by an open vote from a shortlist. Wish us luck! 🙂 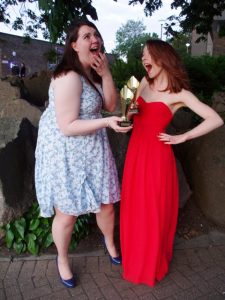 Ellie and Gina Playing it cool 😉