A Canadian in Leicester, Pt. II

Now that you know a little bit about the academic side to Leicester, it’s time to talk about the fun side. The University Student Life. Naturally, student life varies from university to university but I have no doubts that if you’ve made the decision to study abroad, you’ll have few problems adapting to your new way of life. There are 2 topics of interest in this post: the first is what I like to call the Ideal Day scenario (you’ll see what I mean), and the second is accommodation (or ‘residence’, as we Canadians like to call it). Read on! 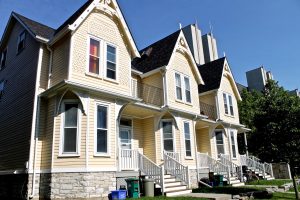 I wish I’d taken more photos at Queen’s, but these are some of the newer houses that students lived in. Click on the photo to see it better!

With that in mind, let me paint you a picture of an Ideal Day at Queen’s. On a warm, sunny day in April, you’re walking down Johnson Street in Kingston, Ontario with your best sunnies and a smile on your face. You’re wearing clothes fit for sunny 24°C weather, which means you can feel the sun rays warming up your insides whilst lovingly caressing your outsides. It’s the perfect temperature so you’re not sweating or overheating. You’re on your way to your friends’ rented student house which is a 5-minute walk away from your own, and because you like to be fashionably late, by the time you’ve arrived, everyone has already claimed a spot and is perched on the front porch or milling about on the front lawn. Each person has their fingers wrapped around a cold beer – some even have one beer in each hand. You do a lap and say your hellos, then settle in to enjoy the sunshine and company while you watch other students stroll along the sidewalks eager to open their beers but unable to do so until they’ve reached private property.

It’s worth mentioning here that in most of Canada, having open alcohol in a place which is not a private or licensed property violates many provincial acts and bylaws. There are exceptions, but I assure you, a student house in a university town is not one of them. The penalty for having open alcohol in public is either a fine or being asked to waste your precious alcohol away by pouring it all out onto the ground. 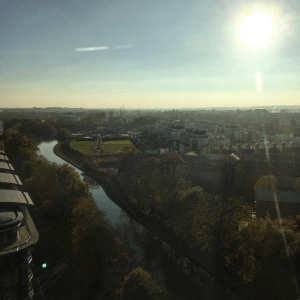 A view of Leicester from The Summit, the tallest building in the city which happens to be student accommodation. Click on the photo to see it better!

Now let me paint you a comparative picture of a Leicester-esque Ideal Day. This time, on the same sort of warm, sunny day in April, you’re walking through Victoria Park in Leicester with just a smile on your face (sunglasses don’t seem to be a popular investment for the Brits but I suppose they never really know when the sun will be out…). You’re wearing clothes fit for 24°C Leicester weather, which feels like 30°C Canadian weather, and if you’re capable of sweating, you are definitely sweating. Because we live in Leicester during the coldest months of the year, your body will become acclimatised to a kind of cold that seeps right down to your bones. It’s a wet cold that clings to you and always finds its way in, no matter how many layers you’re wearing. But I suggest you still wear the layers. Anyway, you’re on your way to the spot your friends have claimed in Vic Park because no one has porches to offer, so large fields of grass are the next best thing. You join the group and you all exchange several comments about how lovely the weather is, then turn the conversation to anything but law. Although you planned to spend a maximum of an hour with your friends in the sun before hitting the books again, you end up staying there until it gets too cold. And end scene.

I just want to take this time to say that I absolutely adore Victoria Park! It’s huge (69 acres!!!), beautiful and green all year round, and is a great spot to take a break from the library and catch some of those rare rays. It’s also a great course to run or bike, as I have observed from my spot in the grass. And, bonus: you can have open alcohol in public in the UK. Except for places with a Public Space Protection Order (PSPO) in effect; a PSPO “allows police to stop people from drinking in a certain area,” such as on public transport. Vic Park does not have a PSPO so you know what that means! 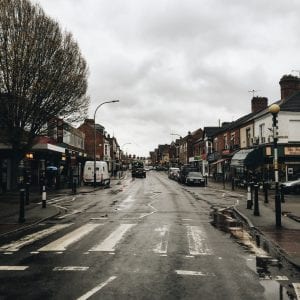 Queens Road: the main street for shopping in Clarendon Park. Click on the photo to see it better!

We’re now going to move on from the Ideal Day scenario and delve into accommodation. I mentioned that no one has a porch to offer and that’s because a majority of not-first-year students live in Clarendon Park, which is where I’m living this year. To get to uni, you get to walk through Vic Park and luckily, it’s the shortest and most scenic route. All the houses look the same on the inside and outside and it’s very charming. Rent is counted weekly (as opposed to monthly), do not include utilities, and is paid in instalments every few months. You can find any number of bedrooms between two and ten, but if you’d rather live on your own, there are studio options around Leicester, which are usually closer to the city centre (‘downtown’) than to the university.

Last year, I lived Nixon Court, which is City Living accommodation. It’s a five-minute walk to uni and that’s the main reason I chose to live there. I lived in a flat of 6 girls, and we all shared on kitchen, two showers, and two toilets. We each had a sink in our own bedrooms. Depending on which room you chose, you’d either have an ensuite and share just the kitchen or you’d have a flat like mine. There’s a pub literally next to Nixon Court called Dry Dock and you will inevitably spend an excessive amount of time there. Another accommodation, right across the street from Nixon Court, is Freemen’s Common and the shortest way to uni from Nixon is through their car park (parking lot). In Freemen’s, there are a lot of blocks and each block has three floors. All three floors are your flatmates so there’s up to nine people sharing two toilets and one kitchen. Although it’s not the best or newest accommodation, it is the closest to uni – a measly two or three minutes away. The last City Living accommodation is called Opal Court and is also a five-minute walk to uni as well as a five-minute walk away from Nixon and Freemen’s. All City Living accommodation are equipped for self-catered students (no meal plan) but you can always choose to become catered by purchasing a meal plan.

I chose to live in City Living because living in Oadby meant having to buy a pricey bus pass; the Oadby Student Village is a 20-minute bus ride to uni or the city centre. I chose to spend that money on my gym membership instead, which is also quite pricey but very much worth it. But, despite the expensive bus pass and the distance from uni and the city centre, living in Oadby is an amazing experience! I met one person who lived in Oadby in first year, and that’s how my whole friend group came to be. My friends lived in John Foster last year, which is the biggest accommodation at Oadby. Each block (building) has six floors and each floor has two flats. Each flat has five rooms, each with an ensuite, and the kitchen is shared. Most of John Foster are catered so the kitchen is used more as the flat’s common room, complete with couches and a table. There’s an Asda (Walmart) just a 10- to 15-minute walk away from the Student Village. Oadby also has their own sports centre (gym) on site, so you don’t have to trek all the way to uni for your workout. Living in Oadby is the best and easiest way to make friends and find housemates for the next few years. Everyone at Oadby is a student at Leicester and the large majority of students living there are first years. There’s usually a mix of courses in one flat, so in your flat, you may have a coursemate (especially if you’re in Law or Medicine), but chances are, everyone else will be studying different things. In any case, you become fast friends with your coursemates, who then introduce you to their flatmates, who are all five minutes away from you. It then becomes a never-ending cycle of making new friends! 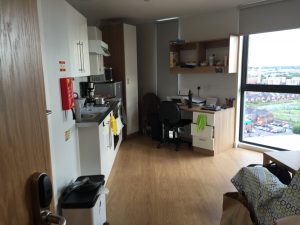 A terrible quality photo of a room in The Summit. The double bed is to the right and the toilet (bathroom) is to the left.

Admittedly, sometimes it is difficult to find some quiet time to yourself if you live in Oadby, but there are lots of other accommodation options around Leicester. One example is The Summit, which is the tallest building in Leicester. It’s essentially an apartment building with lots of studio rooms, each equipped with its own toilet and kitchen area. The building is full of both Leicester and De Montfort University students, as it’s a five-minute walk for the latter. The Summit is always sold out by the end of the summer and is a 10-minute walk to the city centre and 20- to 25-minute walk for Leicester students. To remedy this, last year they opened a Starbucks three minutes away, as well as study rooms and a lounge on the floor above the new Starbucks. The study rooms/lounge and The Summit are owned and run by Sulets, a letting agency (property management agency) for students at both Leicester and De Montfort. Other than Sulets accommodation, there are lots of other choices and, of course, pros and cons to all of them. It’s up to you to decide which pros and which cons weigh heavier in making a certain accommodation your final choice.

Do let me know if you have any questions or concerns about anything in the comments below!

2 responses to “A Canadian in Leicester, Pt. II”