This week I thought I would share with you a very significant life lesson learned in my law degree at Leicester.

Now one thing any student is scared of is that dreaded word… failure.

One thing I have come to realise, though, is that actually failure is a good thing. Strange concept, huh?

Now let’s put this into perspective. Law school feels like a train is hitting you. Continuously. And that’s not to put you off, because once you learn how to deal with that and become superman and push back at that train, and even more commonly get squished by it but still end up achieving a good grade – now that’s a good feeling. That is what makes it all worth it.

But that feeling of admiring the view doesn’t come from perfect grades or knowing the answers all of the time.

All of us LLBers will remember our first ever assignment.

When you look back on it you go “Pfff why were we worrying? That essay was SO easy. Citations? No big deal.”

At the time it’s like ibejashdjafnegibekbfhids HELP HELP RED LIGHTS RED FLAGS HELP I DON’T KNOW WHAT CITATIONS ARE I DON’T EVEN KNOW WHAT WORDS ARE IS THIS DEFINITION RELEVANT WHAT AM I TALKING ABOUT HELP WORD COUNT HELP?!?!? As you sit in the corridor of your halls next to an open window in your pyjamas on top of your duvet because it’s the only cool place and the heating is broken, making it so hot that you can’t stay awake.

For the majority of us anyway, as far as I’m aware of.

It’s all so new and we all panic. Some of us do badly, and some do well.

After that non-assessed mountain has been climbed, what do you do next?

You didn’t get the grade you wanted. You failed. You got a bad grade. You give up, right?

You may feel like giving up, but this is where resilience and redefining failure comes in.

I mean I don’t do maths (and god forbid – it would be chaos), but that’s how I like to live now.

From the research I have done into the concept of failure I have learned that no great human advance was ever achieved in one go. One shot. One try. In other words, without failure. 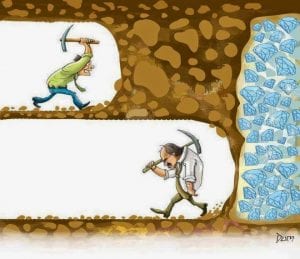 This photo always flashes in my mind when I think about giving up. You can never see how close you are until you’ve actually achieved the task. It’s always a retrospective thing where you say to yourself “I’m so glad I kept studying/writing/reading/TRYING”. You can’t tell how close you are so never stop trying. The only test is how badly you want something.

“It always seems impossible until it is done,” a quote by Nelson Mandela springs to mind. As you well know I love quotes, but it took a long time for this one to click with me. One video that helped this puzzle to come together was when billionaire Sara Blakely speaks of her childhood experience where her father would celebrate success.

He used to sit her and her brother down at the dinner table and ask them what they had failed at that week. Now I thought that he was being harsh on them, until I realised that he would high-five them if they had tried at something. The failure was NOT attempting something. “Failure for me became not trying”.

Click the quote if you want to check out the video, it’s pretty inspiring!

Fundamentally, when you get a bad mark or you don’t get the outcome you want, don’t write yourself off. You haven’t failed, you’ve just completed the first section in the equation of success. You can’t get it right if you don’t know what bits to change and perfect.

It’s a tough lesson to learn, but one that is essential to surviving a law degree as you can’t always win and be the best. It is a lesson that will push you to reach the most spectacular places.

Failure isn’t failing. Failure is a step towards success. Learn to fail so you can learn to succeed.