This week has been so crazy, random and unimaginable that in order to do it justice you need to hear an amalgamation of stories of the best bits. Bear with me.

The week kicked off with getting back into the swing of things at Pole Fitness! This wasn’t before getting my ASDA order and now being fully stocked up on Doritos – what more could you want? Life was good. (Except for when I almost forgot said Doritos and wasn’t sure if I could amend my order).

NB: I think I use brackets to almost narrate on my own posts which I find rather fun, so read it in a slightly different, Ted-from-How-I-Met-Your-Mother type voice. Okay? Okay.

(And yes the ASDA order was one of the highlights. Student life, right?) 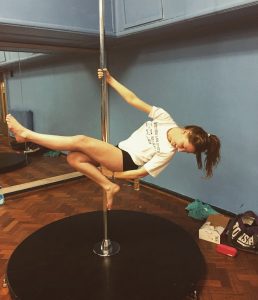 It was great to get back into pole after a week or so out because I was ill. Trying new moves, meeting new people and getting ready for the dreaded Pole Showcase (although I did voluntarily sign up) was just what I needed to start off the week!

One of the next significant features of my week was Buddhist Society on Wednesday where we tried ‘love and kindness’ meditation for the first time. It is quite abstract but is a really useful practice because one of the core beliefs of Buddhism is about having compassion towards all beings without exception. Generally it’s a very difficult concept to understand and then actually put into practice because what does compassion really mean? The most poignant example I was given was by a Buddhist monk that came in to speak to us and he conceptualises it like the sun. In this sense he meant that one day he woke up and opened the curtains to a bright and glorious sun shining upon him – and that is when he knew what compassion meant. The sun shines on everyone without exception – it’s like an appreciation for another being. A warmth. You don’t have to like or love others, but just appreciate. That’s my understanding so far, anyways! So we used this form of mediation to focus on this feeling. We first thought of ourselves, then a close friend, next up an acquaintance, then someone we don’t like, then everyone. You had to wish someone ‘health, happiness and freedom from suffering’. Trying to conjure up an image of happiness within your own existence was difficult enough to hold on to, but then attempting to put that onto someone else was exceedingly challenging. It gets easier with time and is a fantastic notion so I definitely won’t give up on trying to achieve it!

On Thursday I went to one of the events at the Leicester Comedy Festival. It was quite the experience. I mean, I found myself watching a maths teacher play the guitar as he picked apart the mathematical reasoning behind songs and then sung about it himself. Bizarre?! But also very amusing! You’ve got to keep trying new things; even if I only understood him up to the point of quadratic equations, an entire song with every line ending in something rhyming with ‘Pythagoras’ theorem’ was hilarious.

Friday brought a volunteering session with the Mental Health Awareness Society! I was sitting on the anxiety awareness stool so that, following an informative workshop, I could share my knowledge of the topic. It was all centred around noticing when you’re feeling anxious (like when an exam is coming up) and when there’s actual anxiety, which is a feeling that can be brought on for no reason whatsoever. We even had a box where you could write down your worries and put them in the box. It’s a very therapeutic practice since in my mindfulness studies it has been said that imagining your worries floating away in a hot air balloon can relieve stress! Lots of people seemed very interested and willing to listen but I wish we could’ve reached a bigger platform. Another project for another day, definitely. 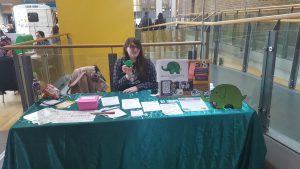 On Saturday the Buddhist Society and I ventured into town to visit the Meditation Centre. It was an incredible experience and I managed to meditate for my longest time yet – 45 minutes! (That was an anti-climax, wasn’t it? Meditation can be a real challenge, seriously!)

We got to sit on these cool burgundy pillows with gold embroidery and the whole session was incredibly refreshing. I felt extremely lucky that these sort of opportunities are available to me. Also, around the Meditation Centre the streets were so quaint, I felt the urge to bring my camera. This is also a big deal because I’m finally developing an eye for photography!

We then went to the cafe in the Meditation Centre which was totally vegetarian and vegan, and run by volunteers! It was such a lively but relaxing atmosphere and I got to try falafel for the first time. (Laugh if you must, everyone else has. And apparently I can’t even say it properly… Oops.)

On Monday I was up at 5am in order to head to London for my assessment centre interview day for a graduate job in charity that I have my heart set on. The day was really challenging, due to role plays and group tasks, which I enjoyed so much. I find out within two weeks if I get the job, but even if that isn’t the case I ‘adulted’ to a new level, and learned so much. But it did mean by the time I came back I was asleep by 10pm!

Today was a unique one too.

Firstly, it is pancake day. If you remember from one of my earlier posts, pancake day was the day I properly forged my friendship with my best friend Marcus. I came out of my lecture and got asked if I wanted to come along to have pancakes, but in my mind I was rolling my eyes and thinking about how much work I had to do that evening. Reluctantly I went along with this rowdy group of lawyers, later to be known also as my people. That day I sat and put Nutella and the obligatory sugar and lemon on the pancakes that our friends made. Marcus and I had the most unexpectedly deep and intellectual conversations, and that was it. We’ve now travelled, and laughed and spent birthdays together. When seeing him a few weekends ago for a flying visit in London, nothing had changed in seven long months. Hence, it was quite a nostalgic day, but this time I was making pancakes in my kitchen whilst Lucie sat there eating apple pie and criticising how flat English pancakes are. It’s tradition now, though. A day to never forget. For that was the day I realised that you can’t miss out on these things, you have to invest in people because they may just well change your life. 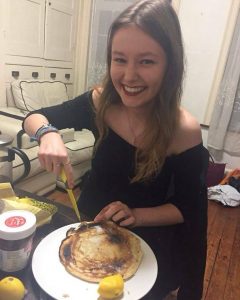 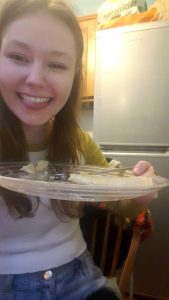 Pancake day 2017. Sharing my dreadful pancake making skills with Marcus even though he’s now in Singapore. I should definitely stick to just putting toppings on or get someone to teach me.

Next up after pancakes was hustings. This is where the candidates standing for election in order to become part of next year’s committee get asked questions. This is the first time we’ve ever had all of the candidates speak, and not just the executive. I wanted it to be more inclusive – and wasn’t it just?! The turnout was incredible and everyone asked such relevant questions. As a whole lecture theatre we all laughed, cheered them on, and came together to support the future of the society. (Can you hear me swelling with pride?) 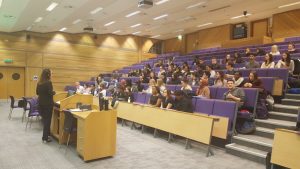 To top it all off we have Lord Neuberger, the President of the Supreme Court of the United Kingdom, visiting this Friday to deliver his Presidential Address as the legal figurehead of our society this year. A day that has taken months of planning is finally coming to fruition and the emotions I’m feeling are inexplicable.

This is university. This is Leicester. It’s a patchwork quilt of awesome.