To all Creators: You are a Masterpiece

Thursday 11th May – otherwise known as ‘JOHN MAYER DAAAAAAAAAY!!!!!’ to me and Lucie.
It has been months since we’d booked the tickets to see her favourite artist, and the excitement was UNREAL. Lucie cried hysterically when we saw an underground tube sign that welcomed the John Mayer fans and wrote sentences by including the names of his songs. It was a roller-coaster watching her emotions unfold throughout the night.

One thing we did talk about, though, is how she’s changed my perspective of the arts. Music and film in particular.

Music has been such an integral part of Lucie’s life, and mine too. But not on the same level at all.

When I loved an artist I knew all of the words to all of their songs, whereas she would know about their music style, their life and their character. It was a dimension I had never even contemplated before.

With Luce mesmerised by the music – singing along the entire time with tear trails glistening from the bright stage lights, arms swaying to the beats, I couldn’t help but wonder who my John Mayer is.

‘Sleeping at Last, obviously!’ I was reminded. And Luce is right.

Sleeping at Last is a musician called Ryan who makes very slow, acoustic, spacey music. Some of it is a little more up-beat too. He is a genius. Seriously. I’ve followed his work for a long time, and found solace at the darkest of times in the sounds he makes with so many instrumental compilations. He puts them together in such a beautiful way that it makes you feel like you’re floating through space. It makes life feel infinite. And his set of songs ‘Atlas: Year One’ were my favourite. Each song is named after a planet, or an ocean. It is joint favourite with ‘Atlas: Year Two’ which now features songs like ‘Sorrow’ and ‘Joy.’ He is a translator of feelings; he turns feelings into music. It is pure magic.

Since realising this whole new dimension I’ve done so much research into his work. To start, his Twitter account is wonderful, and even his Instagram photos capture elements of inspiration for his work. His website is charismatic and you can tell he wrote all of it. There’s meaning behind the themes of his songs, and there’s a map of constellations piecing together his new songs. As Lucie reminds me, these things are an extension of an artist’s music. I didn’t think it possible, but I am even more in awe.

When you find someone who has a passion it is stardust in this world. Uncovering why their passion formed, understanding the way it manifests, is utterly inspiring.

For now I’ve looked up Sleeping at Last’s tour dates – none yet. But crying videos will follow, one day.

I wish I’d explored this so much sooner in my life, but from now on I’ll take every inch of it that’s thrown my way. Knowing more makes these geniuses more human, you know? Especially since so much beauty in this world is fuelled by adversity, suffering and painful experiences that people have forged into wonder and hope. It lets us know that there’s something on the other side of anything that we face, and we can mould such a glorious future. People say don’t meet your heroes – but I think you should. It shows us that they’re only human and that’s not shattering your expectations, but proving that everyone is capable of something extraordinary.

When I was in year 8, about 12/13 years old, we had a school project where we had to write about our role models and I couldn’t name any. I didn’t see the point because you’ve got to create your own path – you’re a unique individual. I don’t disagree with my 12 year-old self, but I was far from the whole truth. I’ve found that surrounding yourself with inspirational people allows you to feel their light. You can harness the force of their passion let it help you to cultivate your own. It doesn’t matter if they’re a world-renown musician, or the random Canadian lady you met at a moot (hey Lesley). Light doesn’t decrease by being shared. Illuminate and blaze forward on your own path.

Find the light that people give off, in every form, and let it fuel your own – every drop of positivity and inspiration matters.

With this new perspective I cannot wait to go to so many concerts, read dozens of new books and articles, listen to obscure artists, explore art galleries all over the world and truly appreciate these exceptional individuals – who they are and how that has manifested in their art. 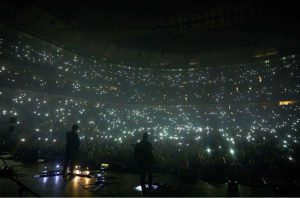 It gives me goosebumps thinking about the moment when the whole O2 Arena lit up with mobile phone torches like a busy night sky – everyone in solidarity, appreciating a masterpiece in the form of a song. But an artist’s masterpiece isn’t just one song, it’s their whole being. I’m learning that the bigger picture is the most remarkable of things.