How I keep organised, revisited

Almost a year ago, I wrote a post about my complex system of organisation and how I manage my time. Well, almost a year later, the system is no longer overly complex, as it’s been stripped down to the bare necessities, so I wanted to revisit it.

The first thing I mentioned was my use of the Apple Calendar app, which is quite literally my whole life. I put everything on there! I’m super scared to lose it, even though it’s already on a cloud, so I back it up by connecting my Google account to my Apple Calendar. I’ve not had any trouble with it (knock on wood), so I’m not too worried about it, but it’s just an extra precaution because of how precious my calendar is. I tried keeping a physical diary, but it just didn’t work for me, because I regularly reschedule things as my priorities change week to week. 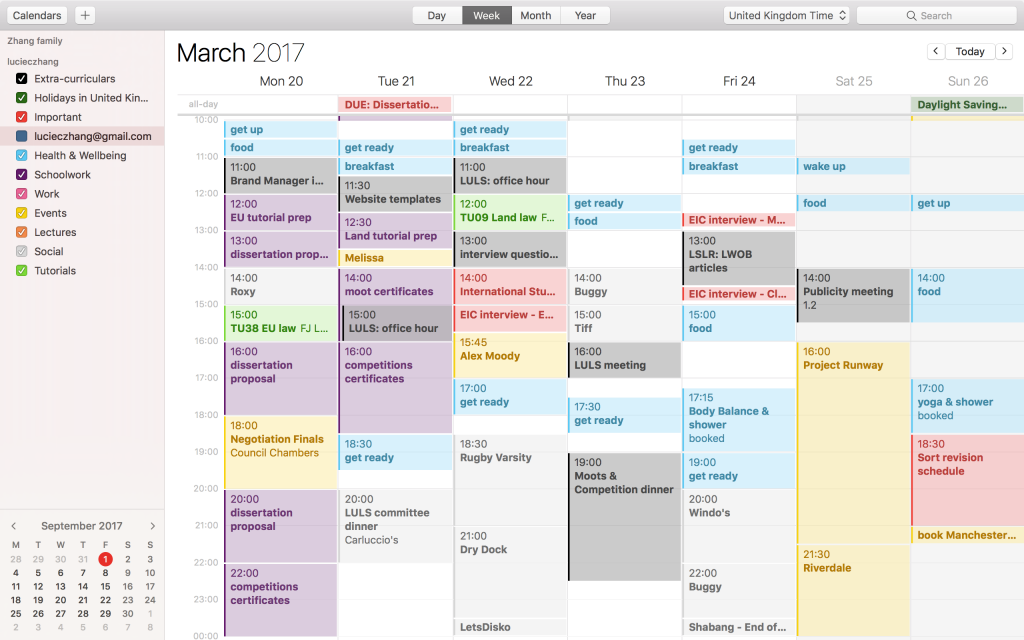 This screenshot is representative of a typical week for me during term time. As you can see it’s a pretty solid mix of coursework, social interactions and going out (I do love me a good O2 night out), extra-curriculars, and personal wellbeing (i.e. eating and going to the gym). You can also see a substantial amount of Netflix-and-chilling on the weekend. I love to use my weekends for winding down from a crazy week and doing non-uni-related productive work, like sorting my revision schedule, planning the week ahead, and other admin-type tasks. 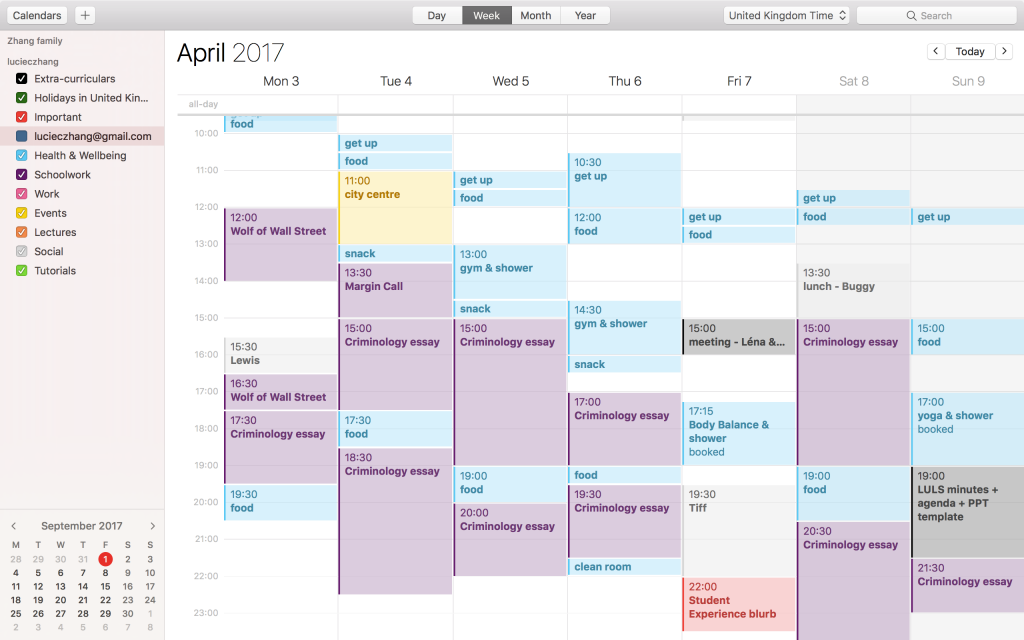 On the other hand, this is what a typical week looks like during revision, when I haven’t got as many commitments to keep up with (i.e. lectures, tutorials, extra-curriculars). Instead, my days are filled with revision, spending time with friends, and taking care of myself. You might’ve noticed that Wolf of Wall Street and Margin Call are marked ‘schoolwork’ – that’s because my Criminology essay was based on filmic analysis, so I had to watch films for it. Not a bad deal at all.

As you can see, I rely heavily on my digital calendar; I rarely know what I’m doing without consulting it, which is probably not good, but I’m getting better at remembering things on my own!

The second thing I mentioned in the last blog post was my minimalistic version of a bullet journal. Quite a few people have told me or messaged me saying that they now keep a bullet journal; that’s the absolute dream for me – influencing you, the readers! So, that was a really lovely surprise!

For me, though, I really stripped it down. I’ve still got my index in the beginning of my notebook, my daily to-do list (seen below on the right), but I’ve dropped the monthly habit tracker (below on the left), because it was just too ambitious for me. I know these might seem like really mundane or easy habits to keep up, but when you’re a student, you’re frequently thrown new obstacles and so, you have to be adaptable. For me, journaling, doing yoga, and swimming every day and getting 8 hours of sleep every night were all unachievable. Admittedly, I do lack the self-discipline to make them all into regular habits. Having said that, I did cut down on my drinking drastically! Since June 2016, I’ve only had alcohol 5 or 6 times, which is a huge step up from first year. That’s one thing I’m really proud of! In any case, I think my new tactic for this year will be to focus on one habit at a time. 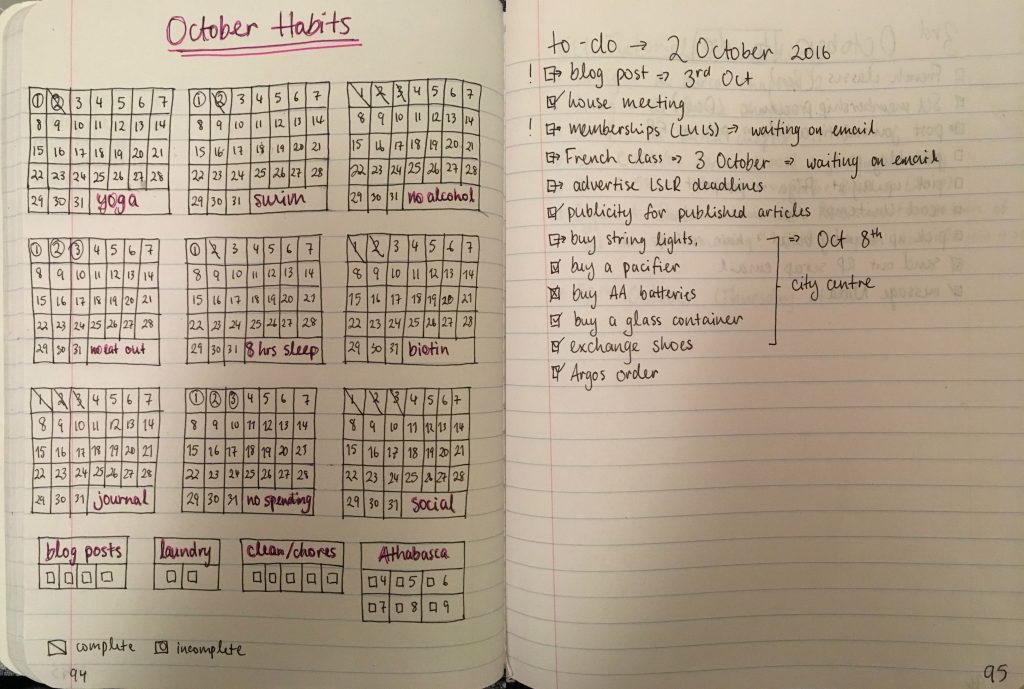 I didn’t keep up with this and it was because I never thought to fill it out. Turns out, I didn’t need it as much as I thought I did, because it was a little bit redundant. For example, it had a ‘habits’ section where I would write the total number of times I successfully checked off a habit in my monthly habits tracker. I mentioned above that I didn’t end up using the habits tracker because it was too ambitious for me at this point in time. And it had a ‘blog’ section, which I kept up with on my whiteboard (coming up next), and it was silly to have to keep track of one thing on two different trackers. It also had a ‘Law Review’ section where I kept up to date on tasks that needed to be done that month, but I also didn’t need that because my calendar ended up being effective enough. I filled out the first one, but didn’t think about it again until I physically laid eyes on it, so I scrapped that! 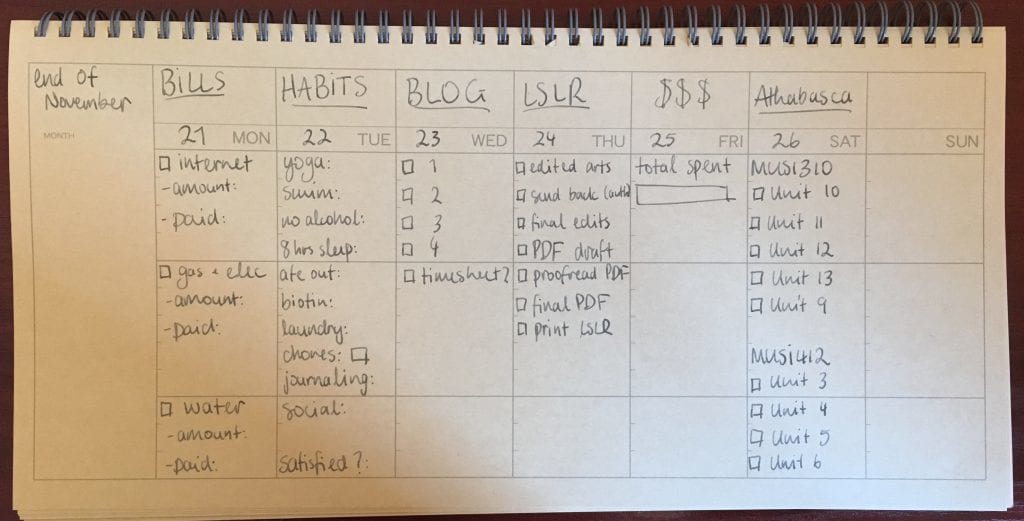 My whiteboard, however, was something that I updated regularly. The monthly focus was something that I struggled with keeping up, because, as I mentioned, I have pretty poor self-discipline. It’s a habit that I picked up when I was younger and still haven’t been able to change (how ironic). In any case, everything else was effective! I made sure I hadn’t forgotten to post enough blog posts that month or to submit my timesheets on time, and I always had a reminder of when I had something coming in the mail (almost always clothes) or when I was waiting on an important email. 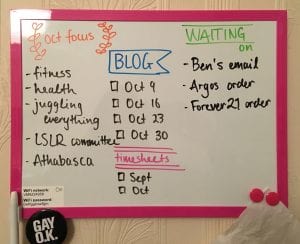 The system I created evolved as a result of my life constantly evolving; in hindsight, it was an overly elaborate system of organisation. The only things I needed from it were the things I was thinking to use: my calendar app, certain aspects of my old bullet journal, and my whiteboard. My keenness to be organised created this complicated, messy structure, but practicality helped me toss out all the rubbish, and I’m all the better for it – I’m not any less organised with my simpler system. Now to work on those habits! I’ll keep you all posted on that!