Posted by Regan in Management on February 6, 2014

Leicester is one of the most culturally diverse cities in the UK, and even after two and a half years I’m still having new cultural experiences! Last week was the beginning Chinese New Year and I was invited to my friend’s (Carmen) house for a party. 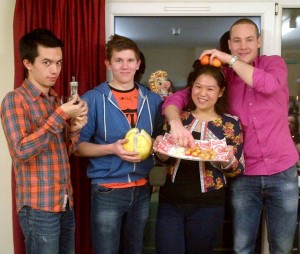 We were told to wear auspicious (bright) colours, so I opted for my vibrantly oranage frisbee top! This also served the double purpose of being a frisbee top as I intended to still go to training after the party – but ended up not leaving because I was having so much fun! We all brought our own food for a ‘pot luck’, where everyone had a little bit of everything. This linked in the the idea of community and bringing together family and friends which was really nice. The food included traditional Asian sweets and foods such as; bakkwa, a dried meat starter similiar to jerky; pomelo, a sweet fruit that looks sort of like a melon and nasi goreng, a delicious rice dish. There was also some German meats on offer, courtesy of our German friend Marcel and I brought some sweet and sour chicken and noodles (although I did have a little help from Uncle Ben!) 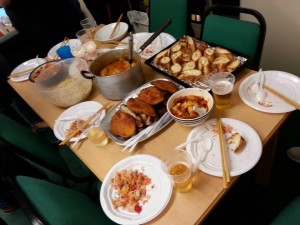 Although my favourite bit of the evening had to be the yusheng – which is essentially a big salad made out of loads of different ingredients. The ingredients are prepared the day before as some believe it to be unlucky to handle knives on the first day of Chinese New Year. We added them one by one to a big dish while saying auspicious things in Mandarin – I mainly mispronounced mine! When we had all the ingredients, we all mixed the salad with chopsticks while saying things we wanted in the New Year (good grades, new car, good job etc). The tradition goes the higher you mix it, the better luck everyone will have over the next year so we were aiming for the ceiling! 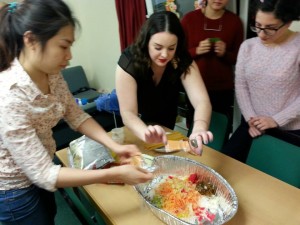 Overall I had a brilliant night and would encourage anyone to celebrate the holidays of other cultures and religions as you never know what you are missing out on!