I went home for most of last week to prepare my family home for me moving back (generally just making room to bring all my stuff from University). Along with this, I took about half of my stuff back so the rest will fit nicely into one car load (unlike my brother’s final journey back from University two years ago, where his stuff barely fit in two cars!). 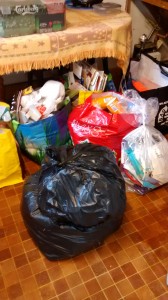 Around a quarter of the bags I binned!

Along with being just a little bit depressing, there was one moment where I was packing up my lever arch files of notes and realised, with a couple other documents, that they summed up my three years studying at Leicester. It was a little surreal, that my course, the thing that has most defined me (as a student) for such a long time could be condensed into a couple of folders and could all fit into one canvas bag! 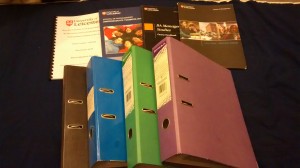 Just an observation I made. It might just be because I’m so organised 😉 but either way, it made getting my notes home a little easier!