Posted by Bella in Management on October 3, 2017

Pretty much as soon as I arrived, I discovered that Lille was an exciting place to be and very typically French. There was the quant old town (Vieux Lille) with traditional patisseries, high-end boutiques and distinctive architecture of Flemish origin. The Grand Place was beautiful and the perfect place to sit and enjoy a Nutella waffle. Plenty of tourist attractions were dotted around the city such as the Palais des Beaux-Arts, one of the largest art museums in France, the Citadel, a large fortress, and the Notre Dame cathedral. At night, especially on a Thursday (student night), the city is buzzing with lots of bars serving strong Belgian beer and clubs mostly with free entry. 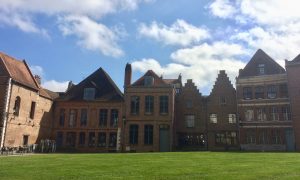 I found the University and the course itself to be less impressive, mainly because the man in charge was very disorganised and at times incompetent. The standard of education was definitely lower than what I’ve experienced at Leicester. However, although it sounds like I’m complaining, this was not the end of the world because it meant that there wasn’t a lot of pressure. Especially as the year abroad doesn’t count to my final degree grade, I just had to pass the year with 50%.

More importantly were the other students on the course. Coming from all over the world, from Spain to Cameroon to South Korea, there really was a mix. Everyone was friendly and very keen to socialise, have parties and go for drinks after class. 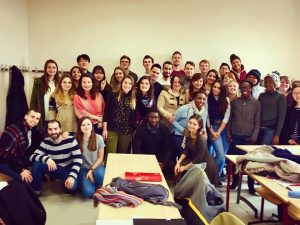 For me, the best thing about Lille was how easy and convenient it is to travel to other European cities by bus. Because Lille is on the boarder of Belgium, we were able to quickly and cheaply visit Brussels, Bruges, Antwerp and Gent. Bruges was particularly memorable – it’s a beautiful fairy-tale-like town with adorable houses and a canal. I spent my 21st birthday in Paris with my boyfriend as well as visiting Disneyland and, after finishing exams, a big group of us rented an Airbnb villa in the South of France and went to Marseille. We also managed to get 2€ flights to Milan during a Ryanair flash sale and went to Pisa from there (to stay with my friend who was doing her year abroad there). We ended the year with a trip to Amsterdam. 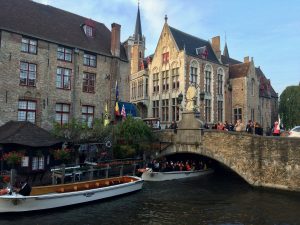 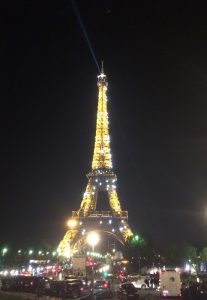 The Eiffel Tower by night 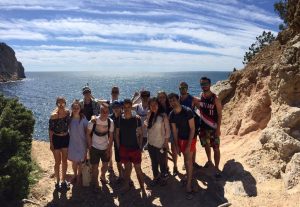 Post-exam trip to the sunny south

So what were my overall thoughts on doing a year abroad? Definitely something you should consider doing if you have the option to. The great thing is that there’s not many other opportunities you’ll get to simply move to another country, have freedom to travel around and see parts of the world that you might not otherwise. You will also meet a complete range of people with upbringings and views contrasting to your own. I have learnt so much about other cultures simply from getting to know different people. It has taught me to be more understanding and not to judge based on stereotypes.

If you decided to do a year abroad with the intention to learn the language, then you will have to be very dedicated to it. Personally, despite a weekly French language class and picking up some phrases here and there, I know I did not push myself enough to speak French, partly due to living with other international students who spoke in English and studying a course in English. But like most things, it is what you make of it.

Seeing so much of Europe and meeting so many European people has made me especially sad about the Brexit vote. No one knows for sure how the referendum result will affect future Erasmus programmes but Brexit seems to go against all the values of intercultural co-operation and integration. It seems such a shame to close the door on that.

See here for an interesting article about the impact of Brexit on Erasmus.

Are you considering a year abroad? Let me know if you have any questions or want to know more!

Hey, I’m Bella, a final year Management student. I will be giving you an insight into what it’s like to study and live in Leicester. You can expect to find me blogging about things to do and places to visit in the city, what the final year of my course is really like, and my favourite pastimes including playing netball, running and eating/drinking. Hope you enjoy reading!