There was worrying news this week that funding from Sport England will only be able to financially support the England national netball team until 2019. The current funding means they are able to pay a group of 23 elite players full-time contracts. However, after this money runs out in 2019, England Netball will be forced to generate their own income and the CEO has said they will have to model it on how male sports teams commercialise, e.g. ticket income and sponsorship revenue. This is a shame as it could potentially damage the success of the national team and the sport in general. Talented young players should know that they have the opportunity to become a professional one day, and not have to do something else to support themselves because there’s no money in it.

Personally I don’t think that netball gets the recognition it deserves and despite being played by over 1.4 million people in this country it is not given as much focus in mainstream media than other sports, most likely because it is considered to be ‘just for girls’ (although recently the BBC has taken note and started broadcasting matches online). There’s been a 44% increase in play at grass roots level last year, the national team are ranked third in the world and the Superleague is becoming more prevalent and competitive. Despite this, it’s not even an Olympic sport.

The idea that it’s a game just played by school girls is untrue and outdated. People from all ages and abilities can play – walking netball aimed at older women is a big thing these days. Men can also get involved, primarily playing a variation called Nets, which in Australia and New Zealand is played equally by both genders. A few weeks ago I went to watch Hertfordshire Mavericks, my local Superleague team, play against England Mens Nets team (was good to see the female Mavericks easily taking the win!).

This is an important topic to me because I’ve played netball from a young age and it’s been a big part of my life, especially since coming to university. I hope that England Netball can earn enough money commercially to fund their professional squad and continue leading the way for the growth of the sport and enjoyment for all. 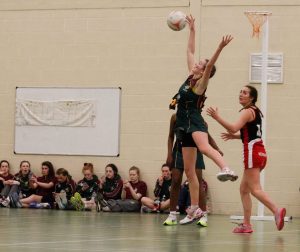 Playing in Varsity against DMU

Hey, I’m Bella, a final year Management student. I will be giving you an insight into what it’s like to study and live in Leicester. You can expect to find me blogging about things to do and places to visit in the city, what the final year of my course is really like, and my favourite pastimes including playing netball, running and eating/drinking. Hope you enjoy reading!