This week has been one of the rare occasions when I find myself with something to do EVERY day (besides lectures, of course). I’ll start with talking about the beginning of the week. Now, every year, usually during March, every competitive sport that both University of Leicester and De Montfort University offer pits their respective teams against each other in a Varsity game. On Monday just gone was the football Varsity wherein both our Men and Women’s football teams faced De Montfort’s, Leicester City football club were kind enough to let us use the King Power Stadium (It used to be called the Walker’s stadium, it’ll always be called that in my heart) for the game. 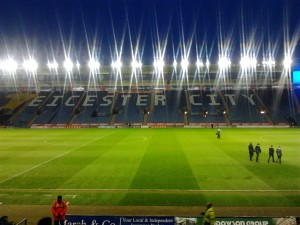 I took a photo from the stands (yes, it annoyed me as well that the L from “Leicester” was covered by an abnormally large football shirt).

The women’s game started off quite well, until our goalkeeper sustained an injury, after spending about 8 or so minutes trying to take appropriate action, the goalkeeper was taken off. The game only had 20 minute halves so this half ended quite quickly and then not long into the second half the De Montfort team scored. There was some very solid effort by the Leicester Women’s team but unfortunately we were unable to equalise so they won 1-0.

Then it was onto the men’s game. There was a solid performance from both sides for the majority of the first half, with some cracking saves by both goalkeepers (a notable mention to the Leicester goalkeeper Dom, who is not only a 3rd year Mathematician like myself but also in Gauss, the best house, OBVIOUSLY). Not long before the first half ended our team captain scored a cracking goal and brought us up to 1-0.

We then had a cheering session from both sets of cheerleaders (one from each university) as a bit of half time entertainment. The 2nd half went along with a similar tune, neither team managing to score against the other until the 89th minute when De Montfort equalised. Moral was low as we were all certain we had the game in the bag. To add insult to injury De Montfort scored another goal in the 90th minute and ended up taking the game. Fortunately, all was not lost as Dom, the Mathematician who I mentioned earlier, won man of the match for some generally incredible goalkeeping.

It actually depresses me somewhat that I won’t be around next year to watch the Varsity game again, last year was an absolute cracker as well. Ah well, let’s just hope we beat them at Rugby Varsity! (Not that I really understand Rugby).