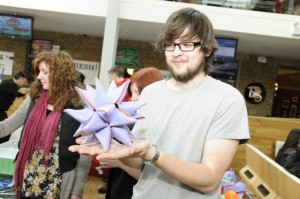 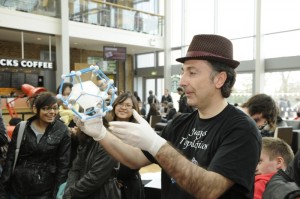 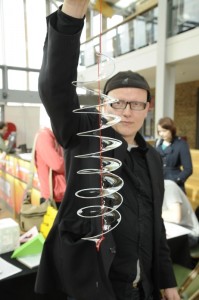 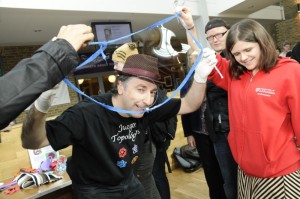 I never thought maths could be quite as interesting as it has turned out to be this week. This week is national science and engineering week, so there has been mathematical events running in the university. On Monday I helped out with the Maths and Magic workshop run by Dr Rodriguez from the University of Almeria in Spain. You can have a look at his website, and see some of the things that he does.

This involved making bubbles with various shapes including cubes,  octahedrons  and dodecahedrons. We also discovered the power of Mobius strips. These are one sided surfaces, and you can make one yourself by twisting a piece of paper round and gluing it together. If you can’t quite picture it, have a look here  .These have many weird and wonderful properties, such as you can draw a l ine across the middle of one and draw it all the way along, and eventually you’ll get back to where you came from, but with every side of the paper covered. Other examples of things you can do include cutting the strip into thirds (along the line you just drew and one other line parallel to it).  I was very impressed with this the first time I saw it.  I’ve shown a few photos of the event here, just to give you a taster.

The other big excitement of this week has been American Pi day. This is the 14th March, or the date that looks like 3.14 in the American date system, which as you probably know, is the first 2 decimal digits of pi. As I live in a household of mathematicians, this was clearly a call for celebration,  and so we all went to Urban Pie to eat (you guessed it) pi and it was a great chance to catch up and muse on the wonder of every mathematicians favourite number. We’ve also been celebrating the whole week with food based celebrations with Shepherd’s Pi on Monday, Pi-ella on Tuesday and looking forward to Pi-zza tongiht. Maybe we are a little bit crazy, but I’m sure we’re not the only one, so please let me know if anyone has had any better pi-related festivities this week.

Jenny graduated from the University in Summer 2013.