I actually can’t believe how quickly this term has gone. I think there’s something about everything being relative which makes time seem to go faster the older you get. Something along the lines of how with every year that passes you have more and more previous years to compare it to and therefore they are a smaller fraction of your life and seem to go by faster. It’s been quite odd this term, usually I find myself going back to London once or twice a month but this year I’ve only been back once and we’re already well into March.

I remember back in first year I would be going back to London 3 or occasionally even 4 times a month. I would say it was because I was homesick but part of me thinks that this was predominantly because I didn’t want to pay for the laundrette in halls and instead got my mum to do my washing for me. Getting to see my London mates was a bonus; that being anyone who was slightly younger than me and hadn’t started university yet, people who weren’t students at all or those who went to university in London. I’d actually given a lot of thought to going to university in London, but my older brother had gone to uni and stayed at home and he’d annoyed the hell out of me, so I decided against it to spare my parents the grief (and to get a bedroom to myself).

So, my first trip back to London this term was a mid-week one which is unusual for me. It was a trip more so for “business” than “pleasure” in the fact that I had an interview for a Postgraduate course there. It never ceases to scare me that this time next year myself and loads of my mates will have degrees. I think an even more daunting thought it that give it a few more years after that and all of my friends who are studying Medicine could be doctors. The interview was over by about 1pm so I found myself with a day to myself to roam around London doing nothing in particular (I’d booked a ticket back to Leicester for about 11 pm) so decided to walk home afterwards (a good 45 minute or so walk). Along my walk, I ended up near London Bridge and saw this: 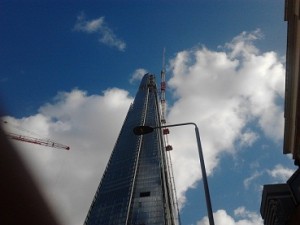 Now, I’ve seen this building plenty of times before but never taken a photo of it (on my phone’s rubbish camera) so I felt like a bit of a tourist. For a Londoner I really don’t know London very well at all, I mainly know about this building because it’s quite near to my house. Now, you may well have never heard of it before, but it’s called “The Shard” and is slated to be taller than Canary Wharf (if the architect gets his/her way) but I’ll believe that when I see it.

Speaking of London I’m actually heading there later today for a friend’s birthday so my parents will have to put up with me for a couple more nights! Bet they’re gonna LOVE that.