My first two months at UoL have gone by in a bit of a blur. It seems like just yesterday that I was nervously packing up my parents’ car and setting out to discover the unknown entity that was ‘Freshers’, but here I am at the close of my first semester wondering where the time went.

Acquaintances from the first few weeks have either become a regular fixture in my day-to-day life or faded to nothing more than a familiar face to spot on the bus or in Asda. So far it seems that my friendships here have been developed based on similar interests and compatible personalities rather than the luck of who was sat next to me in the seating plan on the first day of year seven and that, paired with the intensity of the situation that we’re all settling into, has created bonds that I never thought possible in such a short time. 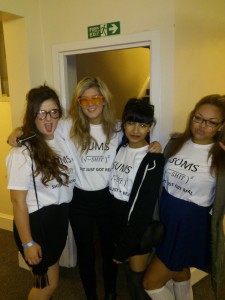 In terms of the academic side of University – which I suppose should be touched upon seeing as it is our reason for being here! – I feel as though I have learnt more in these nine weeks than I did during 12 years of schooling. With three exams and infinite homeworks already under my belt, I’m feeling a bit more confident in my abilities as a mathematician, but also a bit daunted by the masses of knowledge yet to be learned before the January exams.

I’m beginning to realise that my father – also a passionate mathematician – was right when he used to tell me that whilst school mathematics teaches the names and functions of the tools in a workman’s toolbox, degree mathematics begins to teach you how to use them to build the chair. The passion that I feel for maths which may have been sniggered at by other students at school is now massively encouraged, the inner geek that I’ve been hiding for years is warmly welcomed and I love it! Our lectures sometimes feel like an episode of The Big Bang Theory when a lecturer/fellow student makes some sort of witty, maths related joke and we all realise that it’s actually acceptable to laugh now.

The small but significant English aspect of my first semester has been a breath of fresh air, turning my love of reading from procrastination to legitimate study. I no longer feel any guilt in picking up a book and reading for a whole afternoon… although I have to admit that reading Jane Eyre in six days was more of a challenge than a pleasure! I could not have picked a more diverse optional module – it seems slightly surreal walking out of a lecture theatre following 55 minutes of delta/epsilon arguments (I’m sorry but they’re as confusing as they sound!) and into a seminar room with eight other people discussing our opinions on post-colonial literature. But as they say, variety is the spice of life.

On a whole, my first semester has left me enlightened, almost penniless and a little more mature than I was when I arrived – or so I like to think.