I’m coming out of a thick forest and I see the mass of trees thinning out. As I edge further out my eyes begin to adjust to the light and see what’s coming up ahead. It’s the edge. The edge of life as I know it. Deep in the ravine is a gushing river heading to who knows where and despite all my fears I must keep moving, for if I don’t move forwards I’ll just end up moving backwards. As I near the brink, I know what I must do but that doesn’t make it any less scary…

I must take the dive. And hope for the best.

Yes, scholars of Maths can write creatively and in sentences. Sometimes my brain works in funny ways and either a. I’ve been overwatching ‘The Hobbit’ and have convinced myself I’m the hero of a journey to fight for the greater good or b. I’ve had a severe freak-out about the future (you might say the river is the ‘rest of my life’, the cliff being ‘the now’ and the forest symbolising exams).  My exams finished two days ago and revision seems like a lifetime ago, yet despite the idea of this week being dedicated to “chilling” I have found myself worrying about endless possibilities. I also just realised that it’s 2014 and that in little over two months, I’ll be 21. Where has the time gone?!

You can of course witness the logic in being completely chilled during exams and then panicking when they’re over. However, as a third and final year student, the end of January exams means one thing and one thing only: our final semester of university is upon us! Daunting it is, twirled with excitement and emotion, as things start to hit home about what being a final year actually means. It seems ridiculous that we’re so young but so ready to turn the page onto the next chapter of our lives.

As an expert in the matters of stressing, I have compiled a list of things-to-help-relieve-stress-and-not-panic-but-be-real-at-the-same-time:

I’m hoping that when I take the metaphorical plunge I end up in a canoe with some control over where I’m going but for now, that’s beyond where I am. Still a few yards away from the edge and I’m planning on making the most of every single step… 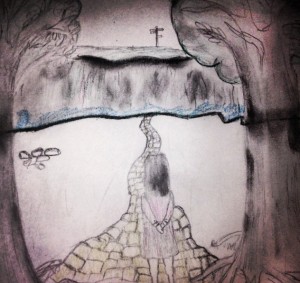 My brain on paper