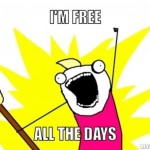 As of last Thursday, I am technically, although not yet officially, a second year. It’s so strange to think that I’m now 1/3 of the way through my degree. I had six exams during this exam season, and I think that the most important lesson I have learned from them is to never revise for a specific topic or question in the hope that it will come up. I did this for two of my exams this semester and whilst I was lucky in one of them, I can’t say the same for the other. Whilst the grades from this year won’t actually count towards my final degree, if the same had happened in a second or third year exam, it could mean the difference between a 1st or 2.1, so from now on my aim is to walk into the exams thinking “throw any question at me, I can answer it”.

Anyway, I’ll be writing a little revision tips post later on (keep an eye out!) so I’ll keep away from exam talk for the rest of this.

Right now I’m experiencing an incredible range of emotions, I don’t think I’ve ever felt so happy and sad and exhilarated and exhausted all at once. I’m happy that my exams are over and I now have nine weeks to relax before second year, I’m sad that these are my final weeks with my housemates and after this, I won’t have another University year in the same country as some of them, I’m exhilarated because in the next 6 days I’ll receive an emailing telling me whether I passed all my modules and can confirm my place in Kent State University, Ohio for second year, and I’m exhausted because of all of the above. In general, my first year of University has been the most academically difficult but socially incredible year of my life. I’ve spent the past nine months constantly surrounded by people, creating bonds that I don’t even have with some of my oldest friends, and I can’t wait to enter second year with my two best friends at my side in a whole new continent.

If I was to give one piece of advice for those people finishing their A Levels right now and hoping to start University in September, it would be to arrive on your first day with an open mind. Cheesy, I know, but I have some friends here at University who I consider to be my closest but who, when I really think about it, would never have been my friends had I started University with the same mindset I had in school and sixth form. In school, it seems that we make friends with people based on similar interests and then stick with that group and don’t really associate with the others as much as we maybe should. At University, not only have I made friends with people with a ridiculously wide range of interests, but some of their interests have now become mine. I know some people who came to University and made three or four friends and decided they didn’t need to make any effort with other people as they were all set. Whilst that can work out fine for some people, living together in second year can cause tension and arguments, and I can’t imagine anything worse than being in a city far away from home with no one to talk to.

In my first week at University, I had already spoken to three of my female housemates on Facebook through the University freshers page (I definitely recommend doing this too!) so we narrowly avoided the awkward phase and pretty much landed straight in to friendship. However, the same can’t be said for our seven boys, who would awkwardly knock on our doors around 7pm to ask if we were ready (we never were) to meet downstairs for a drink before we headed out for the night. Once we were finally ready, we would all sit slightly awkwardly around the table in our communal area with one of the boys (who we still mock to this day) repeating the same questions he had every day before. So use this summer to prepare yourself for the first few awkward conversations with your housemates, you’re going to have to answer the ‘standard’ questions (Where are you from? What are you studying? Do you have any siblings? etc) far too many times before you get to the up-until-6am-giggling stage, but trust me, when you get there, you’ll never want it to end.