Posted by Jess in Mathematics on January 2, 2015

Happy 2015! New year, new start, and a new blogger for the maths department. I’m Jess, and as my profile will tell you, I’m a final year BSc Mathematics student, taking on the task of blogging as I head into the last few months of my degree. Scary thought…

I, like most people, spend a fair amount of time reflecting around New Year. The last few days have seen me making lists of things I want to achieve this year (I’m not big on resolutions, I set goals instead), and thinking about what I did with the year that has just passed. So, what did I do in 2014?

First, the big one: I finished my second year and then started the final year of my degree. If I’m honest, there were moments when I thought I wouldn’t get to this point, but here I am with six months to go, and it feels amazing. I feel like I’ve changed so much since first year, and a huge part of that changing was done in 2014.

On a related note, 2014 saw me have what I’ve been referring to as my ‘second year crisis’. Second year ended, and suddenly it hit me full force that at some point pretty soon I was going to graduate, and I had NO IDEA what I wanted to do. After having a bit of a ‘moment’ about this, I did some of research and some planning, and I’m heading into 2015 knowing where I want to be this time next year!

I kicked off the final year of my degree by trying something new, and it’s something, looking back, I wish I’d done much sooner. I joined the University Women’s Rugby Team.  Let me paint you a picture: a maths student, ex-ballerina, finds herself playing rugby, having never really gotten on with sport before. And yet strangely, I love it. Cuts and bruises? Battle scars. Dressing up as a pylon on a night out (no joke)? No problem! Running round Victoria Park dressed as a zombie? Yep, that’s what we did for Halloween… Being a part of the team has brought me some amazing friends and some hilarious memories, and it’s only been a few months. Bring on tour in April! (Also, it’s not too late to give rugby a go. Find the team on Facebook and Twitter.)

I’ll admit, 2014 wasn’t all smiles for me. I had some issues with my mental health, which I’m not going to go into, and my degree was starting to be affected. Thankfully, I had some wonderful people pushing and supporting me, and things are really on the up for me now. I’m ready to tackle 2015 feeling strong and positive. To my friends, family, and members of my staff in my department who have been there to help this year: thank you.

In 2014 I turned 21, did things I never thought I’d do, and made some insane fancy dress outfits. I fell in love, I fell out of love, I learned who my true friends were. I gained a nephew (and spent lots of time with my two nieces), I watched friends get engaged, I went to my brother’s wedding. I spent my holidays working 35-50 hour weeks, I updated my CV about twenty times, I got this blogging job. I slaved over essays, reports and projects; I revised like crazy and got some decent exam marks. I laughed, I cried, I laughed until I cried. 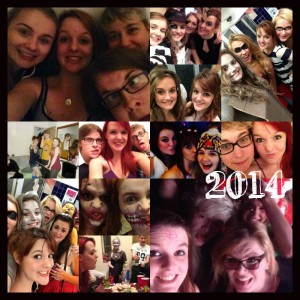 Until next time, when I’ll be letting you know some of my tips for the exam period, let me know in the comments what you did with your 2014.