In a year that will go down as the answer to every pub quiz question from now on, Leicester City certainly played their part. From Andrea Bocelli singing at the King Power after a first league title, to people actually wanting Chelsea to win a game of football, 2016 will live long in the memory. Simply put, they were the best team this year (and it must be true if Sports Personality think so…..). 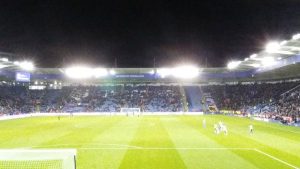 When Ranieri was hired, many thought Leicester would do well to stay up, never mind have any ambitions of winning anything (*cough* Gary Lineker *cough*). But he did what very few managers tend to do: play to the strengths of the team

(A) N’Golo Kante. Just Kante. Everything good about Leicester’s system and style of play were only possible due to him, so regardless of what the PFA think, Kante was the best player in the Premier League (and arguably still is). Mahrez was pretty good too I guess.

(B) Using the simple step by step guide to Jamie Vardy:
1 – Needs to play on the shoulder of the defence to run in behind.
2 – To create this space, you need to surrender the ball to the opposition and allow them to hold a high line. High risk but high reward
3 – Close down the ball in midfield (see Kante and Okazaki) and spring the counter attack (Need a midfielder with a wide range of passing, see Drinkwater)
4 – Jamie Vardy goal
5 – Repeat

(C) Being Leicester. Without the reputation and aura of some of the so called “big clubs”, they were able to play the same way more or less every week because “they were only Leicester”. (No European football helped but that doesn’t really tie in to the whole romantic narrative, so we’ll just ignore it)

But I guess it’s back to reality for Leicester City then. 2016 isn’t really ending as well as the it began as Leicester are just one of many now rather than one of the few . But who cares! They won the Premier League! And who knows what 2017 holds for them

Did someone say Champions League?

Hello blog readers! I'm Luke and I'm in my 4th year at Leicester studying for my Masters in Maths. During my final year here, I'll be writing about the exciting life and times of a student trying to complete his degree while taking part in as many society and club events that he can. So if you have any Maths-y sounding questions or if you just want a fun read while you take a break from working, hopefully you'll find something you enjoy.