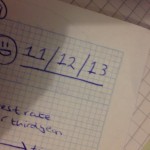 Posted by Pamela in Mathematics on December 11, 2013

Just passing by with a quick number acknowledgement. As someone who loves numbers, I got excited earlier when I dated my work and noticed the date. Yes, it’s 11-12-13! This is what is called a ‘sequential date’ and will not happen again until February 2013 (which let’s be honest, I most likely won’t see). Reading […]

Posted by Pamela in Mathematics on October 28, 2013

When choosing which modules to take this semester, I had to think carefully about which ones would help me the most in everyday life. The reason for this is that I have finally decided what I want to be when I grow up… wahey! (Stay tuned to find out what the decision is) In other […]

Posted by Pamela in Mathematics on October 6, 2013

When you join the University of Leicester to study Mathematics you will be not only be assigned a personal tutor, but also a ‘house’ too. There are four houses within the maths department: Euler, Gauss, Newton and Noether. Nope, your house is not decided by a ‘sorting compass’ that spins to the house which you […]

What to prepare when you’re preparing

Posted by Pamela in Mathematics on September 19, 2013

Tell someone you’re studying maths at university and you will often receive one of the following responses: – ‘Omg you must be a genius’ – ‘Wow that sounds hard’ – ‘I hated maths at school’ – ‘Ah I’m not that good at maths at school’ – ‘Oh what do you want to be when your […]