End of Year Review: 2012 in words, pictures and emotions (Part One)

Posted by Jordan in Media and Communication on January 4, 2013

So you’re reading this blog and Christmas is over. Now you’re wondering that 2013 may bring you, well hopefully it’ll bring you into the University of Leicester studying Media and Communications. If this is something that sounds like something you want to do, then keep reading as I describe and portray a typical year in the life of a university student.

Don’t forget, at the beginning of the year I was a fresher. So in 2012, I’ve technically been a fresher and a second year student, showing different sides of life while at Leicester. The End of Year Review blogs will be split into three parts, with the second part being released next week and the final part the week after.

Last year January, I brought in the new year with revision. And lots of it. I had three exams to take and these were the first ever set of exams in university that I have ever done. I was worried since I’m more of a coursework guy, but in the end, my first set of exams ended up really well. I achieved two firsts and a 2.1.

After the exams, I celebrated with my friends. Normally you would celebrate with your course society and they would throw a social, but there was no student society for Media and Communications. This year, there is and we can celebrate the end of exams as a course!

Snooow! I love when it snows, when it’s fluffy, white and soft. I had new modules to start in February but I think I was more bothered building a snowman and having snow fights. This is what me and my flatmates got up to while it was snowing heavily in Leicester: 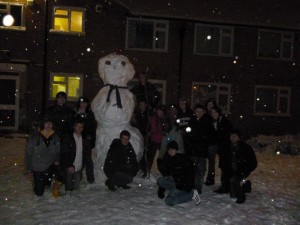 As I said before I went on a snow ramble, I had a new set of modules that I had to learn, which means three more presentations, essays and exams. I found that I really enjoyed The Study of Media Audiences module which consisted of learning about how media violence affects real life violence, how crazy fans of TV shows and films can be and how powerful the media is in changing the way people think, act and feel.

In the student world, February is like starting again.

March was a time where I got really involved with student societies since I had some free time. I remember it was 6am in the morning and I was in the LUST office – the society for student television – helping to get videos edited and processed to submit the University of Leicester’s student video entries for the National Students Television Awards. If this sounds like something you are interested in, check out the LUST Facebook page!

Towards the end of the month, the first essays were due in. As I typically do, I went to the library to rush to get my essays done. Earlier I was talking about the amount of free time I had in March, but in university, you will learn that yourself, just like 99% of other students, are extremely prone to procrastination.

As prospective media students, I’m sure that you know that experience is vital in obtaining a successful job in the media industry. Luckily I’ve managed to have an internship in Sky Movies for the past three years of my life, so I go back there for a week, every year to do some work and maintain a close relationship with the company. Hopefully after I graduate, I’ll end up with a job at Sky!

Make sure you use your time well to gain work experience and internships, Easter is the best time to do this 🙂

Next week, I’ll discuss how student life is like in May, June, July and August, with the following week capping off the later year and the year as a whole, so look out for the next couple blogs!

Jordan has now graduated from the University of Leicester.

2 responses to “End of Year Review: 2012 in words, pictures and emotions (Part One)”