Welcome to the House of Fun! (Well, procrastination)

Well, we’ve hit mid-November and I’ve realised I haven’t yet given you a tour of my student home – What a travesty! After a little bit of arm twisting, my dear old housemates have agreed to release some photos of our day to day life, giving you an unprecedented glimpse of students in their natural habitat.

First off, a few introductions… 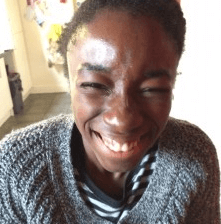 This is Adi, our resident maths student. After a brief goth phase in September, she settled into role as professional Netflix watcher. She can often be found on the couch, slumped next to… 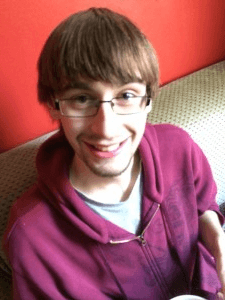 Rob, our native Engineer! Aside from Netflix, Rob sometimes has noodles and bread for lunch (not that he eats netflix for lunch) – The current theory is that he may be allergic to fruit. He’s also captain of the Taekwondo team, so y’know, don’t mess. 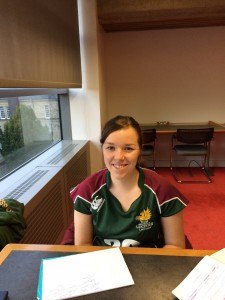 Here’s Sarah, wahey! She’s one of the two other medics in the house, and we’ve journeyed through many course related stresses together. She likes to aggressively beat people with sticks in the name of lacrosse. She also once went to Nepal.

Finally good-old Carys – My fellow global health enthusiast and the wonderful new president of Friends of Medecins Sans Frontiers (that society I’m constantly talking about). She should probably tidy her room.

So what’s it like living with such wonderful people?

As you can see we’re an upstanding bunch of photogenic young people. I met most of them in my first year (Carys and Sarah in my first week of medicine, and I lived with Rob in my first year, with Adi living in the student digs next door) and we’ve kinda just stuck together like barnacles ever since.

Of course, as with any house, there are some underlying tensions, namely focussed on the… 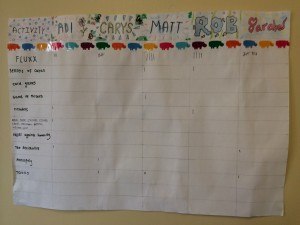 Leaderboard of boardgames! I’m pretty sure this will be the first piece of evidence cracked out when our house breaks down into a lord of the flies style meltdown.  At the moment I’m losing, but just wait until we whip out the monopoly board… You can probably just about make out fluxx, the most random card game in the world, and maybe if you squint you can see the Game of Thrones Board Game – possibly the most time-consuming game in existence.

What on earth do you do when you’re not playing exciting, edge of your seat board games?!

Well, we actually made the amateur mistake of setting up netflix in our front room, which makes every trip to the kitchen a desperate battle to avoid being suck in to a spiral of time wasting activity. If you’ve seen interstellar, it’s like our living room is that planet which makes every minute spent there count as years.

I actually sadly haven’t been spending much time in our wonderful house – I think I may start bringing a sleeping bag to the library (I joke, but it has been known to happen). Oh, and as I took several uncomplimentary pictures of my house mates, it’s only fair I throw this up.. 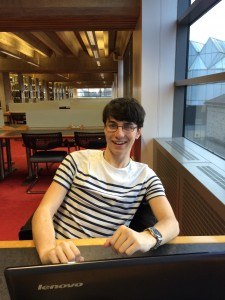 P.S. If you have any questions about student living in Leicester, or indeed accommodation up in the student village, don’t hesitate to drop a comment!

Posted in City | Tagged Student house, too much time in the library | 1 Response

'Ello 'ello! Thanks for scrolling all the way down here. A bit about me: My name's Matt and I'm a 4th-year Med Student at Leicester. I'm a Global Health graduate and spend lots of my time with Medsin-UK, a student network which tackles health inequality through campaigning and advocacy. This year I'll be running a Global Health Short Course with Medsin Leicester (tinyurl.com/uolghsc, open to all), and advertising for participants in PASS1, a UK-wide study into the exposure of Medical Students to Pharmaceutical Industry marketing. If you have any questions about applying for Medicine, surviving Medicine or anything else (pssstt ask about global health), don't hesitate to get in contact.

One response to “Welcome to the House of Fun! (Well, procrastination)”