Jeremy Hunt’s controversial new plans to phase out foreign doctors in the NHS has been met with shock and disbelief by many in the medical profession.

His proposal would be achieved through the creation of an additional 1,500 medical students (about 5 medical school’s worth) each year, as well as preventing doctors from leaving the UK for four years post-graduation.

After all, foreign-born staff make up 25% of the UK medical profession, with that percentage creeping up in undersubscribed specialities such as Psychiatry and A&E.

In addition, 1,500 additional doctors will in no way provide enough capacity to shore up the NHS. The UK already operates with far below the European average, with 2.8 doctors per 1000 population – compared to say 3.4 in France, which has a similar population. This works out as a deficit of 50,000 doctors as things currently stand, and it is a fantasy to suggestive these relatively paltry additional numbers of students will significantly change the reliance the health service has on foreign doctors.

That being said, this policy is sorely needed, but not for the reasons Hunt puts forward. Training more doctors should be an absolute priority for the UK government, in addition to increased health system spending across the board.

In addition, more investment must be put into making sure these students are representative of the populations they serve – and that means putting an emphasis on widening access to medical education, and ending the traditional middle-class stranglehold on the profession.

According to a study by academics at Dundee and Central Lancashire Universities, 80% of medical students come from households containing professionals or those in higher managerial roles, and a quarter came from private schools. A shocking 50% of secondary school’s have never had a student apply for medical school – This makes my own school look relatively prolific, where I was one of two in my year to apply for medicine. 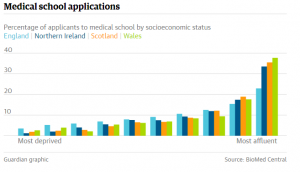 We are missing bright, talented individuals because of a lack of opportunity and support, and this is an issue Hunt will have to work to correct if the medical students we recruit and train are going to be the best they can be. This means widespread investment in education at the primary and secondary level, as well as expansion of University-run access programmes.

Leicester has taken tremendous strides in improving access through MedReach, the Universities access to medical school group, working on outreach to local schools through speakers, workshops and open-days. However, this must be expanded and other routes considered – foundation years, for instance – before we can really say we’re doing everything we can to broaden participation in medical education.

On a student level, the International Federation of Medical Students, which represents 1.2 million medical students globally, recently made widening access to medical education one of its flagship policies. This is as a direct result of lobbying from Medsin-UK, a student run group which campaigns against health inequalities (disclaimer: this is a group I’m heavily involved in). This is fantastic work, and will hopefully put the issue on the table in countries around the world.

Whatever Hunt believes, NHS doctors cannot be exclusively middle class kids with a British passport. We must work to ensure equitable opportunity to work in the NHS for all, and not used to score points about immigration.

'Ello 'ello! Thanks for scrolling all the way down here. A bit about me: My name's Matt and I'm a 4th-year Med Student at Leicester. I'm a Global Health graduate and spend lots of my time with Medsin-UK, a student network which tackles health inequality through campaigning and advocacy. This year I'll be running a Global Health Short Course with Medsin Leicester (tinyurl.com/uolghsc, open to all), and advertising for participants in PASS1, a UK-wide study into the exposure of Medical Students to Pharmaceutical Industry marketing. If you have any questions about applying for Medicine, surviving Medicine or anything else (pssstt ask about global health), don't hesitate to get in contact.