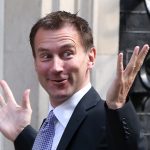 Not only have the junior doctor contracts been imposed, but on top of that, there is talk of the NHS bursary being taken away. The NHS bursary currently gives medical and dental students funds to pay for the 5th year of their degree. With such a long degree, the NHS bursary really goes a long […]

Obviously every year, the UK Christmas Number 1 single is a big deal. I’m a religious X factor viewer and have watched pretty much every season since it started (quite sad I know.) I therefore always love it when the X factor winner’s single is Christmas number one. However, it was really nice that this year […]