The Modern Languages Society hosted an informal screening of the film at our University Film Theatre this Wednesday just gone. Even though I had seen it before, I went to go and see it again as it is a really funny film that makes me even more excited about what’s to come next year on my Year Abroad.

The film directed by Cédric Klapisch and focuses on Xavier (Romain Duris), a French student studying in Barcelona as part of the Erasmus programme. Xavier meets and lives with students from all over Europe and as he is the film’s narrator, the main language is French though because of his multi-national housemates some of the dialogue is in English and a significant amount is in Spanish, as well as small amounts in Catalan, Basque, Danish, German and Italian.

Xavier’s life in the film is what I base my dream Year Abroad on. Without giving away any key plot details, it is impossible not to laugh at Xavier and his housemates’ antics and national stereotypes are portrayed very humorously. I would love to live with an assortment of people from around the world and learn from their cultures and possibly even learn other new languages too.

In one of my favourite scenes, Wendy, an English student in Xavier’s house answers the phone to Xavier’s mum. As the housemates share one telephone, they are aware that parents speaking different languages may ring up to want to talk to their children and so they have prepared a sheet with the phrases to say “I’m sorry [name] is not here, please call again later” in all the various languages. Wendy does not speak French and doesn’t understand when Xavier’s mum asks if he is at the ‘fac’ (abbreviated for faculté, meaning university in French). When spoken in French, ‘fac’ can sound similar to a certain swear word in English making Wendy very confused as to why she was seemingly being spoken to rudely! It’s these priceless lost in translation moments that I hope I have many of during my year away as these will be the things that I reflect on and laugh about.

I don’t know if my brief review has done this film justice but it truly is essential viewing for Erasmus students past, present and future. 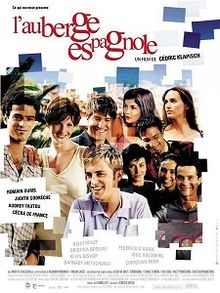 DVD cover of the film